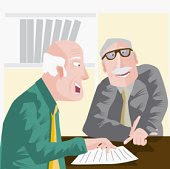 I spent yesterday talking to four people, three of whom I had last seen when they and I were seventeen years old. I’m doing a series of interviews with people (I almost said ‘boys’) who left St Columb’s College, Derry (yes, that’s right – the only school in the world to have produced two Nobel Prize winners – John Hume and Seamus Heaney) in 1960. The idea is to have the interviews completed by next year, the fiftieth anniversary and maybe squeeze a publication out of it.

It’s sobering, seeing people age fifty years overnight, as it were. I was struck by the frailty of the flesh with the first two men – one had a serious heart condition, the other had a stomach problem that he was having tests run on. The second two, whom I interviewed together – one had a serious heart condition, the other was healthy enough but had lost all his hair, once thick and ginger. So I’m sitting there interviewing the second two, looking from one to the other, when I happen to raise my eyes and look into a mirror behind them. Switch the temperature from chilling to blood-freezing: I’m looking at a scrawny old bugger with no hair worth talking about, a neck that looks like it’s made of slack strings of flesh and a smile that shows terrifying teeth-gaps.

And yet I can’t rid myself of the thought that we’re all only pretending to be grown-up, senior, grandfathers and sages. Inside, we haven’t a clue about hardly anything and if we had a chance, we’d opt for having a laugh and maybe getting pissed, preferably in the company of a handful (OK, a group) of gorgeous and admiring girls, rather than exploring the meaning of life or facing the awful prospect that inside twenty years, if we’re lucky, we’ll all be looking at the world from a six-foot-under perspective. In the meantime, though, a resolution: the next shop assistant who asks me to put my ‘WEE credit card’ into the paying thingy and calls me ‘love/pet’ is going to get a fist in the face.

One Response to Older and Bolder