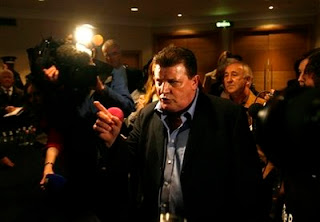 It’s hard to know where to begin in talking about yesterday’s Commission into Child Abuse report in the south of Ireland, but let me try a small number of points that’ve been neglected, whether through stupidity, cowardice or laziness on the part of the media and commentators.

1. Recent research in Britain shows that just over 2% of allegations of physical and sexual abuse against teachers by pupils actually result in convictions. That means around 98% are either lacking in evidence or lies. Presumably this fact has no relevance to the charges of sexual abuse in Ireland against the teaching orders?

2. What exactly is the nature of paedophilia? Is it a pattern of practice which the perpetrator chooses to follow? If so, he should where possible be apprehended, tried, convicted and imprisoned, as punishment for his crimes and for the safety of other children. Or is it a disease, with the perpetrator incurably recidivistic and unable to control his base urges? If so, he cannot be held culpable either in legal or in moral terms, and belongs in a psychiatric hospital, not a prison.

3. Why do commentators refuse to acknowledge that those guilty of paedophilia might also be responsible for much good work? Or is 100% villainy a more convenient/satisfying label for the media?

4. Why do commentators refuse to set the brutality of some members of the religious orders in the context of the time? I was a child in the 1940s and 1950s, and physical punishment, often of a pretty severe nature, was standard in schools and at home.

I could go on but I’ll finish by saying that RTE’s Prime Time last night showed all the balance of a witch-hunt. I kept waiting for Miriam O’Callaghan to call on the Christian Brothers’ spokesman to prostrate himself on the floor and denounce in a loud voice the Catholic Church and all its works and pomps. Never let it be said that the British mob’s appetite for expenses-account blood wasn’t matched by the very-moral media on this side of the Irish Sea.

View all posts by Jude Collins →
Hold out your hand, you naughty Minister
Ending Up in Irish