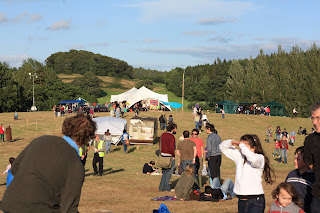 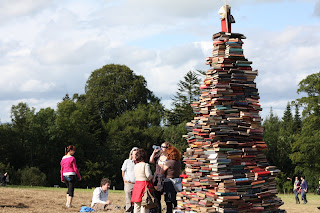 We visited the Flat Lake Festival in Co Monaghan on Saturday, and while the event has a lot of positives, there were two negatives that irritated. When we went to get our tickets, we asked for the five-euro reduction as advertised on the website for the festival. “Yes I know it says that on the net, but we’re not able to do anything about that here – you’d have to take that up with them”. The choice was obvious: start insisting that the festival should be a joined-up affair or fork out the extra five euro. The heart said scream and shout, the head said shaddap and pay. Mercifully and with an effort, the head won out. Then later in the day, we lined up to get some ‘Organic lamb burger’. As we did so, the burger proprietor chap – a Trinity graduate, as it happens, in his handsome late-30s – came down the line with paper cups and a bottle of wine. ‘Would you like some wine while you’re waiting?’ So naturally Maureen said yes, thank you very much. Chap gives her the paper cup, fills it and says ‘That’ll be three euro, don’t forget to pay’. Were we naive to think he was offering it as a kind and free add-on? Or was he a con-artist who needed a punch in the Trinity-graduate teeth? Alas, again the head won out.

That’s the negatives. The positives were that it’s a unique sort of mix of rock music and country humour with quality arts – they had karaoke sheep as well as Stephen Rea reading from a new play and Shane MacGowan and Eoin MacNamee and…Last year they had Seamus Heaney, Michael Longley, Edna O’Brien and Paul Muldoon. Oh, and Paul Brady, if you like that kind of thing. It’s also an interesting setting – much of the action takes place in barns where you sit on bales of hay. So it spans the generations. I thought the attendance and the major billings were a bit down on last year (although Patrick McCabe of ‘The Butcher Boy’ fame is one of the major organisers and performers). One final little vignette: as I queue for my lamb burger, the queue inches forward and the large, crop-haired guy (late thirties again) in front of me is wrapped in chat with guy alongside him, so there’s a gap after him until the queue resumes. Not wanting to be caught out, I ask him ‘Excuse me, are you in this queue?’ ‘Oh yes, we are’ quoth he, or words to that effect. Five mins later Phoebe came back and showed me a text she’d sent to Patrick, urging me not to read it aloud. ‘Dad has just asked McNulty of ‘The Wire’ if he’s in the queue for burgers’. And indeed it was he. I’m busy polishing the incident so I tap him on the shoulder, eye-ball him from close-up and demand to know whether he’s in the mother-fucking queue or not… If you’ve watched ‘The Wire’, you’ll see how much more appropriate the imagined response was than the dreary real-life one.

View all posts by Jude Collins →
My Country, ‘Tis of Thee…
Left left high and dry?