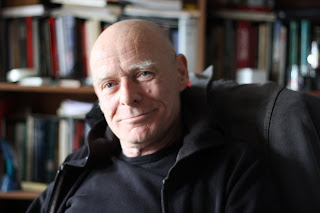 I did an interview with my old classmate Eamonn McCann today. He’s part of a group of over twenty former St Columb’s old boys, I suppose you could call us, who left St Columb’s College, Derry, in 1960 (or thereabouts).

There are people who go on from school to shine in the adult world while having been not particularly notable in their youth – I remember this being the memory of an English lecturer at St Patrick’s Teacher Training College, Drumcondra, who had taught the writer John McGahern. Eamonn wasn’t like that at school: he stood out from the start.

Not in a good way, in the view of some. Back then, just as now, he was always ready to challenge authority. Those who dislike him would say he did so because he enjoyed being bolshy. Those who like him would say he did so because authority needed challenging and he had the tongue and brain for the job. If I’m honest, at school he annoyed me more than once with the sharpness of his wit – we boarders didn’t like smart-arse dayboys, and we sometimes showed our disapproval in physical ways.

In the fifty years that have elapsed since we both left the College, I’ve run into Eamonn on a number of occasions, and read his writing and noted his contributions on radio and TV. Two things have impressed me. One is the originality of his thinking. No matter what the issue, he always seems to come up with an angle or a detail that I hadn’t quite noticed before. The second thing that I admire him for, and if anything my admiration is greater in this instance, is that he is grudge-free. In St Columb’s he more than once was on the receiving end, from staff and pupils, of what can only be called bullying. Were that me, I would remember it with a simmering rage. I’ve never once, including today’s extended interview, detected a hint of resentment from Eamonn.

I know people that bridle at the mention of his name and others who use coarse language. I don’t agree with all his thinking, particularly regarding the Catholic Church, but I know he’s one of the most intelligent and honest thinkers I’ve met. The fact that his views often provoke hostility says more about those who take umbrage than it does about their author.

One Response to Good old boy