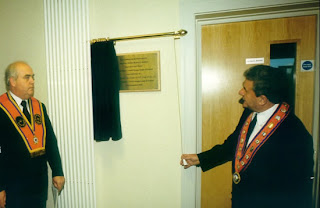 As I write, I’m listening to the voice of Alex Attwood of the SDLP speaking on the radio. He’s saying he figures that a deal is near and likely. When someone as obscure in his phrasing as little Alex can come out and say that, the end must indeed be nigh…Oh, hold that. He’s just said that some backwoodsman might jump in and wreck any deal. And then ‘I’m sorry, Stephen – I have to go – there’s some business I have to do’. Time to put an armlock on the projected backwoodsman.

What amazed me is that, on ‘Hearts and Minds’ on the BBC yesterday, it was revealed that the DUP and the UUP had had a meeting at Schonburg House (HQ of the Orange Order) back last December. I’m not amazed that the Orange Order is up to its oxters in other things than religion and culture; I’m amazed that the BBC produced it. They’ve just given Sinn Fein a hugely effective weapon in support of their argument that the Orange Order (cliché alert) tail is wagging the unionist dog.And this in the wake of a speech reported in yesterday’s papers, where Sammy Wilson of the DUP was castigating the BBC for being too favourable towards nationalists. I have my grievances against the BBC and against particular individuals in it, but hats off to them on this one. No wonder Danny Kennedy of the UUP was more spluttery and inarticulate than usual last night when asked to explain this Orange-sponsored meeting.

As things stand, I don’t know how Sinn Fein could have done much better in recent daysl. If there is no deal, the two governments will publish their proposals and these will include a date for policing and justice devolution. So Sinn Fein will end up agreeing with the two governments’ proposals and the DUP will look like the walk-away party. If there is a deal, Gerry Adams’s statement last night about the idea of a Garvaghy Road or Lower Ormeau Orange parade being ludicrous has firmly nailed Sinn Fein colours to the mast, so it’s impossible for any agreed deal to include same.

If I were Sinn Fein, I’d be clicking my heels a little bit this morning.

One Response to The dog with the Orange tail