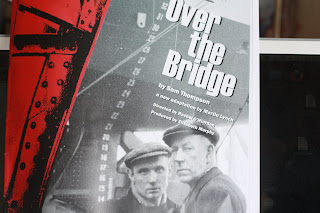 I was at a play on Saturday night, a play I’d heard about dozens of times but never seen – Sam Thompson’s ‘Over the Bridge’. It’s the story of the Belfast shipyards in the 1950s and the fate of a Catholic worker, Peter O’Boyle, who has the courage – or foolhardiness – to stand his ground when faced with the intimidation of the mob. The play was first produced in 1960 and was adapted for this production by Martin Lynch. It had most of the Lynch trademarks – vigorous action, rough humour, the use of pop songs. But in addition to the acting, what impressed me most was the play’s refusal to adopt the Alliance position. You know, where one side is as bad as the other, isn’t it a pity we all couldn’t like each other a bit more, let’s each take One Small Step to reach out to our neighbour, etc. None of that mush. The victim, no ifs and buts, was the Peter O’Boyle character, and he was a victim because of brute loyalist ignorance that hated anything Catholic or Irish, and that had its way because those more reasonable Protestants in the shipyard, with one exception, were incapable of standing up to the mob.

View all posts by Jude Collins →
Reflex venom
On not running