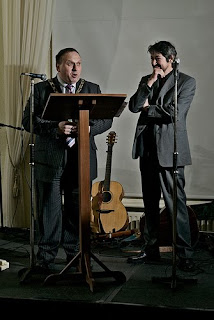 It looks as though the Conservatives have had their way with UCUNF nominations for South Antrim. The local UUP branch wanted to have Tom Watson, the mayor of Antrim, as their candidate, but the Conservatives gave it a thumbs-down because of Watson’s views on gay people. Which are? Well, that’s hard to say. Originally in 2006 he said he wouldn’t want them as guests of his family’s B and B; then more recently he’s said that it was his wife’s religious convictions that were the issue, that he personally would have no problem with accommodating the odd gay couple, and what’s more he would work for his gay constituents, if elected, as energetically as anyone else. Well now. A kind of a classic case of one set of convictions running slap bang into another. The general view – the law, probably – would say you can’t turn away a couple from your B and B or hotel on the grounds that you see homosexuality as a sin and would be in some way complicit in it when you provide a room for the couple. But not to provide it would be to deny them their legal rights. On the other hand, it does seem harsh that if Mrs Watson and/or her husband want to act out their religious convictions, they must abandon a source of their livelihood. That would mean penalising them for their religious conviction – surely wrong as well.

It’d all be so much clearer if Mr Watson had stuck to his views on gypsies. It seems he’s not keen on them either. By now the liberal elements of the Conservative Party (Yes, Virginia, or sort of Yes at least, there may indeed be such a group) must be wondering what traditional Irishl bog-hole they’ve stumbled into.

View all posts by Jude Collins →
Is ‘Over the Bridge’ over?
Know your enemy