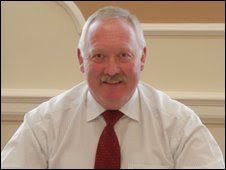 I’ve been away for a few days and it’s reassuring and dismaying in equal measure to come back and hear the flat northern vowels being exchanged once again. But I never know I’m really back until I hear a politician saying something truly funny. Tom Elliott was in good form this morning, reassuring anyone who’d listen that the selection of agreed unionist candidate Rodney Connor for Fermanagh/South Tyrone was about bread-and-butter issues. Ah, home sweet home, I thought. Where else would you have a candidate selected on the basis that they are a unionist accepable to both sides of unionism, then projected as answering the needs of the people of F/ST to have a ‘working MP’ – i.e., one who attends Westminster after swearing the oath of loyalty to QE2. And there was me thinking it had something to do with expunging the smell of republicanism and in particular the memory of Bobby Sands’s victory in the 1980s. Not a bit of it. It’s all about getting jobs for the area, and schools and so on, and you know how effectively that can be done by an MP from the north going into the Mother of Parliaments and saying ‘Please, Sirs, we want more’. Margaret Ritchie, apparently, is upset that the unionists have made it ‘a sectarian headcount’. You bet you are, Mags. Especially as it’s going to make the SDLP candidate look like the one who either hands the seat to unionism or risks doing so. Meanwhile in South Belfast, Alastair McDonnell’s underwear must be drenched in sweat: a similar agreed unionist candidate would soon put paid to his puny 1200 majority.

View all posts by Jude Collins →
A friendly word in my shell-like
They are the greatest?