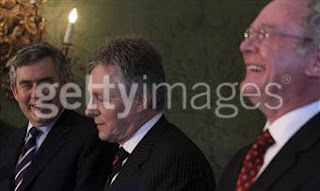 Well – isn’t it exciting?  One minute Nick Clegg looks like he’s going to fall into the arms of David Cameron, the next he’s heading for the manly embrace of, er, um,  A N Other. Alas poor Gordon, we didn’t have time to know him well. Ian Paisley figured that as a son of the manse, Gord would be sympathetic to fellow Presbyterians here in the North.  Mmm.  He should have tried telling that to the Presbyterian Mutual Fund people.

Anyway we are, as they say, where we are – with the possibility that the MPs from the North will form a vital part of a coalition mainly made up of Labour and the Lib Dems. You can almost hear Maggie Ritchie  getting her best red frock from the wardrobe and her best debating-society speech for delivery shortly after swearing fealty to Queen Elizabeth II.  But if the baker’s dozen from here are key to the formation of the next British government, have Sinn Féin shot themselves in the foot (if that’s the metaphor I want) by abstaining? Are they outside the loop?

Well yes, they’re certainly outside the physical loop – they don’t go into the debating chamber of the House of Commons. Does that mean they don’t count? It does – they won’t help form the numbers that would put the Lib-Lab group over the majority line. But it’d be a mistake to see the baker’s dozen as wielding massive influence, or even teensy-weensy influence.

Supposing a coalition of Lib-Lab-Scots-Welsh-Irish is formed. And suppose the baker’s dozen from here  – or some of them – decide they don’t like something – say, the cuts planned for here – and they pull out and the whole edifice collapses and there’s another general election. That’s not going to endear the North’s representatives to the Brits of whatever political stripe. It won’t do anything for the state of affairs here  either – the government that gets elected next time will be mad as hell at the North and will have the support of the British people in putting the boot into this sad little corner.

Don’t think our politicians haven’t figured this out – they’re not that stupid. If they go into coalition with the Lib Dems and Labour  – IF  – and by the time you read this,  the Lib Dems may have gone scurryring back into the clammy Cameron embrace – they  will be prisoners in the cage created by themselves. Incidentally, the people from here least likely to break out of any coalition are the DUPers.  Why? Because the last thing they want is to bring to the forefront a thought that continually lurks at the back of the British electorate’s mind: what in God’s name are we doing, paying £8 billion in subsidies to this bunch of Irish nutters?

View all posts by Jude Collins →
Who’s on next?
Flowers and forgetting