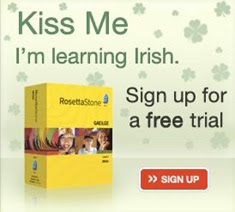 Next Monday I’ll be starting a week-long course in Irish at the McCracken Summer School on the Antrim Road, where I’ll be continuing my up-hill attempt to master the Irish language. One of the deepest regrets I have is that I allowed the incompetence, neglect and occasional brutality of my Irish teachers at school to drive me away from the language, and  one of my proudest boasts is that even at this late stage I’m discovering its beauty and complexity.

Which raises a question I’ve raised before: why do the unionist/Protestant community here recoil from the language?  We’re told it’s because it’s been hi-jacked by republicans but that doesn’t  make sense. Nobody can hi-jack a language; it’s there and available for everyone. Yet even the most enlightened of Protestant grammar and secondary schools in the north don’t offer Irish as a regular subject on their curriculum.
My own suspicion, and it’s no more than a suspicion, is that  unionists turn from it because a race memory tells them to avoid going native. If you’re part of the colonizing power, the one thing you must guard against is becoming integrated with those you rule. In twenty-first-century Ireland, such attitudes make no sense, and yet the unionist/Protestant population here go on turning their backs on the treasure-house that is the Irish language.  They’re afraid that, were they to enter, their otherness would be fatally compromised and they’d be faced with, well, an appalling vista. So they sit outside the treasure-house and either pretend it’s not there or, like Sammy Wilson, throw verbal stones at it.
It’s tragic what insecurity can do to a people, isn’t it?

View all posts by Jude Collins →
He’s seen the Twelfth on both sides now…
A president, some policemen and a queen…