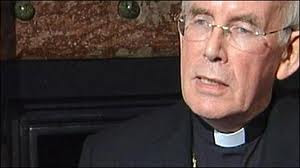 You’d think that with our history of injustice, from discrimination to internment to Diplock courts to the Birmingham Six and the Guildford Four,  we’d be careful about declaring someone guilty without clear evidence. Well, you’d think wrong, then.  I’ve just finished reading an extended assault on Cardinal Sean Brady by Malachi O’Doherty, and in the course of it he describes him (Doherty does Brady)  as a man of moral ineptitude,
Now I kind of like Malachi – always have. There’s something about his terrier quality, his pint-sized spunkiness that appeals. And agree with him or not, he can write –  a gift not always possessed by the clergy-assaulting ranks to which he belongs.  But he’s full of the brown stuff on this one because his argument is based on one presumption: that Fr James Chesney was involved in the Claudy bombing and other violent activities.
There’s no evidence of that. There’s the word of a Special Branch officer who claims that he was all set to raid Fr Chesney’s home when his superiors pulled the plug on it. There are RUC claims, reported by Al Hutchinson, that say  Chesney was actively involved in IRA operations. But nowhere does anybody produce a fragment of evidence that Jim Chesney was involved in a single violent act.
And yet several times in the course of his article Malachi lashes both Cardinal Conway and Sean Brady for their response to the Chesney affair. Cardinal Conway was guilty of ‘a gross violation of innocence’. He (Malachi, not Cardinal Conway) declares Fr Chesney to have been ‘a murderer’, ‘a mass murderer’ and insists Cardinal Conway knew this to be so.  And he (Malachi, not Conway or Brady) believes Brady should have resigned long ago if, well, if he doesn’t agree with Malachi about child abuse as well as the Claudy case.
Was Fr Chesney a member of the IRA? I don’t know. Neither does Malachi. Thousands of young men at the time were members of the IRA. But whether Jim Chesney was or was not, no one is entitled to get on a high moral horse and declare him a member, let alone a mass murderer, except they can adduce evidence to support their claim.  That’s what a system of law – innocent until proven guilty –  is about,  and that’s what moral integrity as distinct from moral relativism demands.
You’ll notice that on several occasions above my syntax became so clotted, it may have seemed I was talking about Malachi when I was in  fact talking about William Conway or Sean Brady. So it’s just as well I didn’t borrow the title of Malachi’s article for this piece, or the confusion between the two clergymen and Malachi might have deepened. The title of Malachi’s piece was ‘A Moral Dullard’.

6 Responses to Malachi and his moral high horse