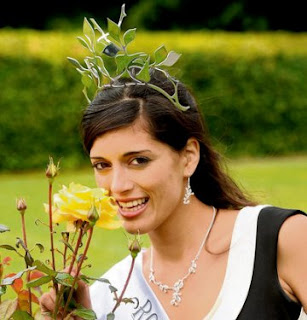 Is The Rose of Tralee the most toe-curling, buttock-clenchingly embarrassing TV programme ever devised by humankind, or a brilliant and uniquely-Irish festival that taps into something important about being Irish at home or abroad? Maybe (to be balanced for once) both.

The bum-clenching bit used to be reflected in the sweaty embarrassment of the man doing the emcee thing over the couple of nights. I still remember with a faint nausea the sight of Gay Byrne trying to chat up the contestants, ending with him getting down on one knee and getting dangerously close to fetishism as he removed their shoes so they could lep about and do some high-kicking Irish dancing. Then there were the shots of the proud mum and dad in the audience, grinning in an embarrassed, everyone’s-looking-at-us way, the tales of work with mentally-handicapped children and dedication to world peace, and did I mention how maaaaaaaaahhhh-ingly silly the male escorts looked when the camera turned on them?

Against that there’s the fact that the competition skips the bathing-suit bit. It does put a decent emphasis on the young women having personality as well as looks. Gay Byrne is gone. It brings much-needed revenue into Kerry. Some of the young women are good-looking, confident and smart to a level that does produce something like pride that Ireland (or at least Irish people) can produce such quality. The Festival tells us much about emigration and how people who’ve emigrated still maintain the ties that link them to Ireland. And as important as anything, like the ‘Back to school’ signs in the shop windows and the political conferences, The Rose of Tralee tells us the summer is just about over and it’s time to turn thoughts once more to autumn chill and darker nights and, yes, omigod, can that be …Christmas up ahead?

We need such signposts to help us make our way through each year. As summer festivals go, The Rose of Tralee is a lot less ugly and threatening than some.