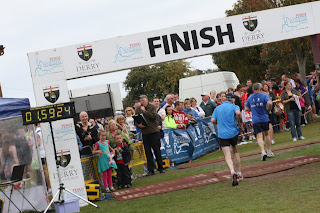 As I was saying before Mr Paisley interrupted…I ran the Derry Waterside Half-Marathon yesterday. No, try again. I competed. No. I took part. That’s it. I took part in the Derry Waterside Half-Marathon yesterday. They say they had 1600 entrants but just 900 names are listed on the results board for the race. Still,  a pretty substantial entry.  The Waterside, as you probably know, is that part of Derry City where virtually all the Protestants have retreated to over the course of the last thirty years.  This is a source of genuine concern and embarrassment to the Catholic/Nationalist majority, who are keen not to repeat in mirror image the sins that were inflicted on them over  the decades following the establishment of the state, when Derry was a joke for its gerrymandering and discrimination.  So far they haven’t figured how to reverse the trend.

I suppose if I were living in Derry I’d know better who was behind the organization of the Half-Marathon and whether there was any significance to the fact that it all took place on the Waterside. You’d think with two bridges available, and a third footbridge under construction, someone would  have thought of symbolically reuniting Catholic/Protestant/Nationalist/Unionist/Cityside/Waterside in the course of the race. Alas not so. Maybe in the future. Meanwhile, I staggered through the 13+ miles, most of the way fearing that my gnarled legs would disintegrate, leaving me a helpless, whimpering heap while other runners ran round me. The present Mrs Collins took several pictures– a few of me before the race which I will put on Facebook, and a few after the race which I have already destroyed with one exception, for the very good reason that in them I look like Lazarus must have looked before they told him it was OK to start breathing again.
For all that I’m glad I did it. This is the third half-marathon I’ve tottered through and in all cases there’s been a sense of camaraderie, of unity in pain, that’s kind of wonderful.  It doesn’t take away the pain but it makes it more bearable. It’s odd, really. We don’t appreciate warmth until we’ve felt cold, or light until we’ve stumbled in the dark, or rest until our sinews have been stretched to creaking, cracking point. Or, I suppose, peace until we’ve had war.
Derry. I  think I love the place. Did I mention I’ve a book about it coming out next week?