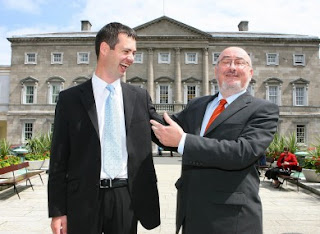 It was a bit like the economic crisis, wasn’t it? We saw the Donegal South-West upset coming but it still was a shock to the system when it arrived. The figures tell the story: Fianna Fail’s vote share has gone from 50% to 21%, Sinn Fein’s 21% to 40%. Almost but not quite a see-saw exchange. Fine Gael and Labour got 19% and 10% respectively.

What to make of it? Well if you’re the Irish Independent, you’ll get a big fat headline ‘History is littered with winners who lose out next time round’. I’m tempted to email the political editor who wrote the piece and ask him if he’s interested in a bet on Doherty retaining the seat, but I’m busy anticipating collecting some big money from Eoghan Harris, who has £1,000 riding on his belief that Fianna Fail will take not just Doherty’s seat but ALL the Sinn Fein seats. (No seriously – I have 500 witnesses to that)…Where were we? Oh yes. The Indo warns he’ll perhaps lose it inside weeks, Fianna Fail’s Mary Coughlan blames the Greens for the loss (go figger), Fine Gael says ach sure, nobody takes the by-election seriously with a general election looming, and Labour …Oh dear, poor Labour. For reasons best known to themselves, they opted to run Frank McBrearty. Now it’s true Frank McBrearty is a man who’s been grievously wronged by the gardai, but anyone who thinks he has the stuff that makes a political representative needs his head examined…What’s that? I’m speaking of Eamon Gilmore, the hammer of Fianna Fail, the man with the answer to our economic woes, the most popular party leader in Ireland? Do you know, I suppose I am.

The big question is, did we see in Donegal South-West a miniature of the coming general election? In this I’m in agreement with Fianna Fail’s Eamon O Cuiv. Probably tingling from the references to the fact that Sinn Fein last won a by-election in 1925 when his grandfather Eamon de Valera was in charge of Sinn Fein, O Cuiv says Donegal is not the model, otherwise the results would be like 1918 for Sinn Fein. Well no, Eamon. For a start 1918 included the north, didn’t it? And like every other major party in the south, you’re desperate to forget the north exists. But you’re right that Sinn Fein won’t gain as many seats in a few weeks’ time as they did in 1918. The question is, will they gain any seats? And if so, how many?

Nobody knows. Not Eamon O Cuiv, not Mary Coughlan, not Gerry Adams. But we do know one thing after Donegal. Anyone who thinks disgust with Fianna Fail will send Fine Gael and Labour sailing smoothly up on the other side of the see-saw is in for a major political kick in the teeth.

View all posts by Jude Collins →
Brian, Bill and the faceless men
Behind closed doors