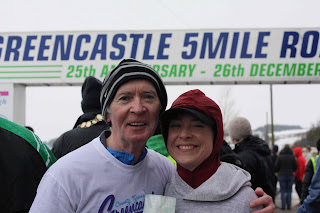 “Life,” a wise woman once said to me, “is a matter of contrasts”.  Too true.  We don’t appreciate silence if we haven’t experienced noise, we don’t enjoy a drink if we haven’t gone thirsty, and we don’t appreciate the outdoors if we haven’t been stuck inside for days and days and days and days. Ever wonder why the Boxing Day and New Year’s Day sales are such a time-honoured tradition? It’s because people have been lodged in the bosom of their family like a bullet lodged in a lung for what seems like six months; when an excuse presents itself to get out and see other people, a world beyond the suffocating perimeters of the family home, most of us are away like a newly-released wildebeeste.
Which is I’m sure part of the reason why I like going to Greencastle every St Stephen’s/Boxing Day.  That’s Greencastle in Co Tyrone, about ten miles from Omagh. Every year for twenty-five years now, the day after Christmas has seen the gathering of hundreds of athletes to compete in the Greencastle  5-mile Run. Did I say athletes? Some are, like the guy I met in the queue for tea and sandwiches and buns after the main event. “I feel like drinking 100 pints the night” he said. “Or maybe 120”. Not only had he starved himself of any alcohol on Christmas Day, he’d been off the sauce for some six weeks as he trained. That was why he clocked a time of around 30 minutes for the race. Quite right –  that is a mile every six minutes. A heart-stopping pace. At the other end of the spectrum you’ll get youngsters from ten upwards, or oldies like myself from 65 upwards. (Make a note of that ’65 upwards’ phrase. I’ll be coming back to it.)
So yes it is partly a matter of contrasts: sleet stung our eyes  and the wind whipped through our souls as we headed into exposed countryside. There was snow in the fields for miles around, and on the slushy road the slap of rubber soles, grunts of exertion, gasps of near-despair as mile followed weary mile and we hit that fearsome section three-quarters way home where the road suddenly ascends what feels like vertically and you think your heart is going to burst in your chest  and come flying out like shrapnel, spraying fellow-competitors, if you don’t stop this punishment very very soon.
But then suddenly you’re going down the long slope towards the finishing line, then you’ve hit the damp mat and are standing half-bent, hands on knees, wheezing like a whale, and local volunteers are pressing bananas and bottles of water and clipping the little run-timer chip from your shoe and you’re out of the cooooold and into the warmth of the hall and wolfing down sandwiches and buns and cake and tea and the happy atmosphere of a community that knows its own identity, its own strength, and has for twenty-five years delivered this radical seasonal tonic for hundreds of people.  On the drive home  with my dearest daughter I’m weary and heavy-eyed and spent but once more grateful to Greencastle and  run organiser Oliver McCullagh. On a wind and snow-daubed hill-side they’ve worked their annual magic again.
That ‘over 65’ phrase?  Well you see in the prizes there’s this Men’s 65 + category… (Blushes modestly and stumbles off-stage, carrying a rather stylish Nike running top.)