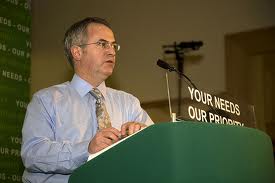 They say the opposite of being loved is not being hated. It’s being ignored. This is particularly urgent if you’re a politician: the day the public forget who you are is the day they’ll stop voting for you. So with elections coming up here in May, politicians are busy digging their elbow into our ribs. Some of them –not many – are sufficiently young not to be laughed to scorn by posting messages on Facebook and Twitter. Others, like Edwin Poots and Peter Robinson, get attention by issuing statements criticising the GAA or attacking Catholic education. And then there’s little Alex Atwood.

I’ve always felt an affection for Alex. Somebody once said of Richard Nixon “Just think what that man could have achieved had he been loved!”; and when I see Alex’s little face tense up as the TV cameras approach, or hear him deliver over-long responses to questions as though he was still part of a particularly dull debate at Queen’s thirty-five years ago, I want to wrap my arms around him, give his tummy a rub and say ‘There, there, little man, we won’t let them hurt you, I promise’.

But of course Alex is a politician so the poor diddums has to go out there and shout ‘Look at me!’ with the best of them. His latest wheeze is to push for an extension of Sunday opening hours for shops. Alex says that some changes are needed because consumers ‘now have greater expectations’ which I think means they want longer opening hours. How does he know? Search me. Why do the birds go on singing. Why do these eyes of mine cry?

But Alex does tell us he’s considering bringing us into line with shops in Britain. Well, why not, sure don’t we live in a post-nationalist era. In England they can open on Sunday for six continuous hours, whereas here it’s just five. An hour, Alex figures, will make all the difference. It will ‘boost the local economy, benefit the tourist industry and support regeneration of town and city centres. This would be very useful in the current economic environment and going forward’. Jeez. Going forward, eh? That’s the mistake the south made – they didn’t go forward. They should have skipped that IMF loan and talked to Alex first.

To calm fears that he’s gone all red-eyed and radical, Alex reassures us: ‘I believe a review would be a timely and balanced way to go forward’. See? I told you – or rather Alex did. Going forward. That’s the key.

So forget those silly nightmares you’re having about your January credit card bill. Get down to the shops as soon as Alex pushes that legislation through. No need to thank him, either. Just make sure next May he gets your No 1. Going forward.

View all posts by Jude Collins →
Believe me, I’m a politician. I mean I WAS a politician.
Philip Hollobone: the hammer of misguided minorities