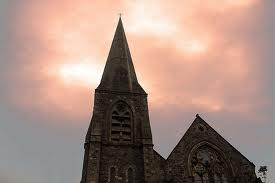 I was scheduled to do an interview for Don McGurgan in Omagh yesterday, remembering what it was liking growing up in Omagh, particularly at Christmas-time. Alas, the weather intervened and even though like everyone else I’m wildly excited about the new road between Dungannon and Ballygawley, I decided to stay put in Greenisland. I’m sorry because Don’s project looks like a very interesting one ( check it out on http://sweetomaghtown.com/). But it’s got me thinking about Christmas back then, over a half-century ago. (My fingers almost snapped off in surprise when asked to type that last sentence.)

There were twelve pairs of shoes laid out the night before so Santy could put his presents where they belonged. At the Christian Brothers’ School, the talk was all of stockings. “Where do you hang your stocking?” the teacher would ask us, and like everyone else I would say ‘On the bedpost’. I suspect most of the boys in my class did nothing of the sort, any more than myself. But I wasn’t thinking of them, I was thinking of me. I couldn’t say we didn’t have stockings. Actually we’d plenty of them – I’d five sisters and a mother – but none that you could possibly put anything into other than a leg. The same applied to the main course on the big day. “We eat a turkey” I parroted along with all the others, when asked. We ate nothing of the sort – we had a goose. We kept turkeys (delicate, stupid creatures with not enough brains to come in out of the rain) but we sold them a week before Christmas. It was a goose that gave its life for us and very nice it was too. But I hadn’t read Charles Dickens then and goose was another guilty Christmas secret I kept quiet about.

On Chrismas morning, while it was still dark, we’d pile into my father’s Austin 8 car. Don’t ask me how you fit twelve people into a small car but somehow we did. I could be wrong but I think Mass started at eight o’clock. We’re talking Latin Mass here – Latin from the Introibo ad altare Dei to De profundis clamavi ad te, Dominum. What’s more, Christmas Day was the one day of the year when you got three Masses for the price of one – all priests were ‘allowed’ to say three Masses, and they did. Three in a row. A lot of sensible Omagh people figured one was enough, but my father always had an eye for a bargain, whether it was a springing heifer or a spiritual matter, and he stayed for all three. So we did the same. The priest, to give him his due, didn’t waste time – at the end of the first Mass he’d go reeling straight into the second without waiting to draw breath, then likewise with the third. The whole thing was over inside  an hour but it was still a lot of end-to-end praying, especially when the chapel was cold and we still had to open our Christmas presents.

Then it was back home and ripping the bundles stuck in my shoes or beside them. Annuals were big for me –  ‘Film Fun Annual’ and ‘Radio Fun Annual’ and ‘The Hotspur Annual’. After that it was a matter of killing time until at last – AT LAST – around maybe half-past two there’d be a shout that dinner was ready. It came served on the Good Dishes that were used only on Christmas Day. There’d be soup and turkey and spuds and peas and gravy and orange juice and a second helping of spuds and another wee bit of turkey and sherry trifle and rounded off with tea and Christmas cake, great raisin-studded, icing-capped wadges of Christmas cake, until we were so full we creaked when we breathed. After dinner there would be arguments about who got to sit nearest to the fire, until our parents eventually got fed up and chased us – the Wee Ones – outside to run around and play. Sometimes a few of the youngsters from Watson Park, the all-Protestant pre-fab housing estate across the fence from us, would come over and show us what they’d got from Santy. It seemed sort of scary that they hadn’t been to even one Mass that day, when everyone knew that not to go to Mass on Christmas Day was a mortal sin.

Then it would get dark and we’d come back in and look forward to tea and more Christmas cake and mince pies, not because we were hungry but really just for something to do.Then there’d maybe be a game of snakes and ladders with my sisters or a rigged hand of rummy (it must have been – I always lost) In the end we’d stumble to bed, half-suffocated by the heat of the big fire, tired already of our presents, bloated with food and drink, and half-longing for the next day when a more normal world would start again, where you had porridge for breakfast and stew for dinner and jam and bread for supper.

Christmas was good then, if for no other reason than that someone else had to order your world for you. But it was a bit disappointing as well. How could it not be? In the end, the weight of expectation placed on it was so crushing, we felt half-relieved to escape back into the ordinary.

View all posts by Jude Collins →
Abortion: time to face a central question
Christmas? Hold the bah, hold the humbug…