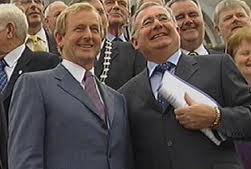 Hands up if you remember the arrival of the IMF people in Dublin? It seems an age ago but when they first came, a weird version of the Emperor’s new clothes began.  Everybody knew they were in town, everybody knew a  bail-out was about to happen, but Brian Lenihan and Fianna Fail stayed blank-faced and in denial: no, no, no, no, no, there were no negotiations,  there were no plans for meetings, there was no question of a bail-out,  IMF officials, what IMF officials?  Next thing,  Lenihan and Fianna Fail are knee-deep in, not so much negotiations as receiving stern instructions as to what would happen. Cue removal of Emperor’s new clothes.
The scene in today’s Dail  will be a bit like that. Nearly everyone wants the Finance Bill to go through.  What would normally take weeks and weeks will  go zinging into legislation inside four days. Don’t you love it? Legislation that will effectively crucify the non-wealthy in the south will be fast-tracked by Fianna Fail and the Greens. Fine Gael and Labour, of course, are against this happening. That’s why they’ve agreed to remove any obstacle to the Bill’s passage. You want a clear run, with no awkward questions or other legislation?  You got it. You want to make sure this Bill is passed before the general election? You got it. Are we – Fine Gael and Labour – in favour of this Bill? Of COURSE not – we’re completely opposed to it.  Can’t you see how opposed we are? The  Emperor’s new clothes all over again: Fine Gael and Labour swearing they’re clad head-to-toe in anti-Bill finery when the rest of us seem convinced they’re as naked as new-born scaldies.
You need proof? Then watch what happens if Michael Lowry and/or Jackie Healy-Rae follow through on their mutterings and refuse to support Fianna Fail and the Greens in voting through the Bill.  Fine Gael and Labour will be forced into the open, forced to vote for the Bill or at best abstain. The instant they do, the game will be up. Like it or lump it, the electorate will see their silly pretend-game collapse and they’ll stand there in all their skinny-dip glory.
Oh God. Time to lie down. I’ve just thought what Pat Rabbitte might look like…

View all posts by Jude Collins →
Labour and the sweet smell of a Merc
Gerry Adams can’t spel!

One Response to Fine Gael and Labour: do their bums look big?