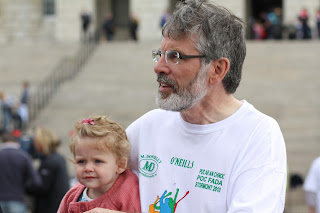 High on my list of things that send me running for a pillow to pull over my head so I can shriek without sending the cat up the living-room curtain is the kind of person who goes on about literacy levels. “Kids today – they can’t spell!  They write ungrammatical sentences! What’s education come to if people can’t write?”  They then pull out several examples of these terrible sins and waggle their eyebrows at you. Granted, time spent doing this kind of thing keeps these critics off the streets or from torturing helpless animals,  but it ignores the fact that  Shakespeare consistently made spelling mistakes, that the final chapter of James Joyce’s masterpiece Ulysses  is without a single full stop, and that book shops and libraries are stuffed with unreadable books in which the spelling and punctuation are flawless.
In the past couple of days we’ve had similar brain-numbing nonsense about Sinn Féin’s economic competence. Gerry Adams was asked in a BBC interview the other day if he knew the child benefit rate in the south or the south’s VAT rate: he didn’t. This has been seized on as evidence that Mr Adams doesn’t know what he’s talking about in terms of the south’s economy, and that Sinn Féin as a party haven’t a clue about getting the south’s finances on an even keel. Final proof of this incompetence? Adams’s failure to answer the child benefit and the VAT questions are linked to his failure in a TV debate  with Michael McDowell of the PDs during the 2007 election.
Dear God. Supposing Gerry Adams had known what the child benefit rate was, and the VAT rate, and all the other facts and figures about the south’s finances…What would that have proved? Being able to spell and punctuate isn’t much use if you’ve got nothing useful to say; being able to reel off facts and figures is of little help if you can’t produce a strategy for getting the state’s finances in order. In the famous 2007 debate, McDowell was seen as having wiped the floor with Adams; what is glossed over is the fact that McDowell was spouting the Celtic-Tiger-hooray philosophy of the time and Adams was warning against a corrupt system that rewarded financiers at the expense of ordinary people.
There’s little merit in being a champion speller or sentence writer if your book says nothing worth reading, there’s little merit in being a slick debater if you’re talking dangerous tripe, and there’s no merit in radiating facts and figures (think Garret Fitzgerald) if your idea of good economics is to sink a state into ball-breaking debt, yea even unto the third generation, so bankers can collect bonuses and the Irish people are left to pick up the tab for big-time bond gamblers.
Please, interviewers. Stop asking Gerry Adams if he knows the price of bottled gas and ask him what Sinn Féin can offer to help the Irish people – and do the same with politicians from other parties. Enough of the would-you-look-at-that-he-can’t-spell-onomatopoeia school of criticism.

View all posts by Jude Collins →
Fine Gael and Labour: do their bums look big?
Doing the time for whose crime?