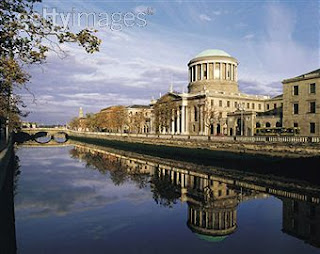 I’ve got in-laws who live south of the border, most of them in Dublin. Over the last forty years we’ve visited them regularly, had a meal, checked out the shops and the sights. They’ve come north of the border to Belfast too; but the visit ratio is around 30: 1. Over the last twenty years they’ve come a little more frequently – say 25:1 –  but nothing you would notice.
Why? Their main reason, especially in the early years, was that they didn’t want to be shot or blown up.  That’s understandable. When you watch TV and see only reports of violence coming from an area, you tend to associate danger with that place. But it’s more than that. Although they’ve never articulated it, my in-laws exude a sense of uneasiness, of not being at home (yes I know, I KNOW they’re literally not) when  they’re here.
Contrast that with our appetite for visits south. Dublin has a grace and charm that Belfast can never aspire to. The accent is easier on the ear, the people more relaxed, the atmosphere more…cheerful. Even, in the midst of their economic nightmare, optimistic. When I was a child, my father used to take us on a summer Sunday from Omagh to Bundoran and the seaside. As soon as we’d crossed the border into Donegal, we always gave a spontaneous cheer.  I don’t actually punch the air any more but I still feel my spirits lift as I move south.
I say all this because the BBC’s Mark Devenport has been busy spinning a theory about the impact of Sinn Féin’s electoral success south of the border on the north’s upcoming elections.  Consider, Mark says, Sinn Féin’s movement into ministerial office in the north and how that was supposed to impact on their electoral fortunes in the south in 2007. It didn’t happen.  Far from electoral success, Mark notes, the party’s Dail representation dropped from five to four TDs.   His suggestion is that in the coming election in the north,  Shinner success  south of the border could well have little resonance.
But then as a lad, Mark never crossed the border between Belleek and Ballyshannon and gave a yelp of delight or felt his spirits lift, yes totally illogically,  at the sight of a green post-box. The truth is, we in the north are more impressed by the south than they are by us.  Even now the violent conflict is largely over, they’d rather watch from a safe distance; and  they quite like the way the southern media paints Gerry Adams as in need of a sat-nav to find his way to the Dail. In point of fact,  it’s the other way round – southerners need a northern map.  Being less provincial and less partitionist, nationalists in the north are more aware of what’s going on in the south, respond to it, argue over it, visit it.
So while there are commentators who’ll tell you that Sinn Féin success over the weekend may well prove irrelevant to what happens north of the border in May,  I don’t buy it.  Check Facebook, check Twitter, check your own experience. Thousands of nationalist homes in the north followed every twist of the south’s election campaign,  thousands more did a good deal of yelping and air-punching when Adams and Doherty featured in the top-five vote-getters in the south, and regardless of what Tony O’Reilly’s  Sindo  may say, even the dullest northern dog noted that Sinn Féin near-quadrupled its numbers in the Dail last Friday.
When it comes to elections yes,  it’s the economy, stupid.  But it’s also momentum.  And while it may stick in some craws,  SF have the big M  now.

6 Responses to Will February matter in May?