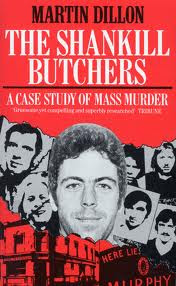 Stephen Nolan’s show ‘Shankill Butchers’ on BBC last night didn’t so much bring fresh revelations about that loyalist 1970s gang as confirm what most of us have been thinking for a long, long time. Five things struck me while watching it.

1. The Shankill Butchers were terrorists. That might seem obvious when the word is used so frequently about people actively involved in what was a small-scale war during the time of the Troubles, but it helps to use words that are accurate. Some dictionaries will tell you that terrorism is the use of organised violence to secure political ends. That’s no use: all wars use organised violence to secure political ends. Other dictionaries talk about “an organised system of intimidation”: that’s nearer the mark. The defining characteristic of terrorism is that it deliberately attacks the civilian population in the hope that this will turn that population towards peace and/or surrender. By this description the Shankill Butchers were terrorists. They attacked, not the IRA or the INLA, but ordinary Belfast Catholics. The programme contended that they wanted to frighten the nationalist population into turning against the IRA and suing for peace under any terms.

2. The Shankill Butchers were cowards. As Nolan’s programme reminded us, every single one of their victims was isolated and defenceless, in a number of cases a bit drunk as well, and the Butchers always acted as a group when they abducted them. So several men against a single individual, late at night, with the victim as helpless as could be imagined. Cowardice personified.

3. The identity of the Shankill Butchers was widely known. Not to the RUC, according to former Chief Inspector Jimmy Nesbitt, but to journalists, lawyers and at least one-third of the Shankill population. And yet they were able to go on killing for a number of years.

4. The people of the Shankill were not simply intimidated into silence. That’s not to say they weren’t intimidated. As May Blood pointed out, if you didn’t want to set yourself up as the next victim, you closed your door and shut your mouth, which the people of the Shankill did. But the idea of a population who loathed the killers in their midst got shattered with the funeral accorded to at least one of them – Bobby ‘Basher’ Bates. Thousands of people lined the Shankill to pay their last respects to this shockingly cruel man.

5. The Shankill Butchers went beyond terrorism. In the brief descriptions given by Chief Inspector Nesbitt and by some relatives of the victims, in the pictures of the cleavers and boning knives they used, in the description of the torture meted out to one man who survived, it was obvious that these men hated nationalists/Catholics with a visceral, irrational, brutish hatred which went beyond mere terrorism.

There aren’t many programmes about the Troubles that make me feel like throwing up but this was one of them. When we were shown a clip of the car riddled with bullets in which Master Butcher Lenny Murphy died in 1982, it was hard not to think that, compared to his victims, he got off lightly.

34 Responses to Five things we know about the Shankill Butchers