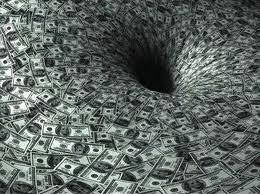 The Irish economic crisis is a tangled, multi-stranded mess that baffles thorough analysis, but most of us manage to grasp the key points amid the welter of jargon. We know that far more was borrowed than could be paid back, and so we know that far more must have been lent than should have been. The European banks lent recklessly to the Irish banks, the Irish banks lent recklessly to the property developers, and the property developers went first mad and then bust. So who picked up the tab? The one group who, for the most part, hadn’t been involved in the merry-go-round: the people of the twenty-six counties. Some political parties, like Sinn Féin and the Socialist Left Alliance, said the involved European lenders should be made to pay, rather than the uninvolved Irish people. This was shouted down by Fianna Fáil, Fine Gael and Labour as loony left economic illiterates mouthing off.

Let’s try an educational parallel. The teacher is out of the room so the class goes a bit nuts. Spitballs fly, insults are shouted, people are out of their seats grappling with each other and generally having a whale of a time. The teacher hears the racket, says the culprits have five minutes to fess up. Whereupon the half-dozen biggest boys in the class declare that they can’t all possibly own up, because if they do the class will get a bad name with all the teachers. So they locate the weaker half of the class – the ones with specs and not-big muscles – and tell them that they must take the blame for everyone.

The teacher comes back, the weaker half of the class steps out and gets thrashed within an inch of their lives. A week later the teacher comes back and says he’s not finished and thrashes the innocents once again. And now he’s at the classroom door, a cane in one fist and a leather strap in the other, and he’s calling for the weak ones to step out a third time, and the big boys are nodding their heads and saying well it’s only right, otherwise the whole class will get a bad name and then where will we be? Some say there’s a glimmer of hope because Big Boy Michael Noonan is now muttering vaguely about the blame being shouldered by some others as well, but most figure he’s doing so strictly for effect.

What’s baffling is why the people of the twenty-six counties aren’t insisting that something, ANYTHING other than the present policy be tried. If the way things are arranged at present means that the innocent are paying for the guilty – and by God they are – any alternative must be worth trying.

One Response to Ireland’s banks: anything would be better than this