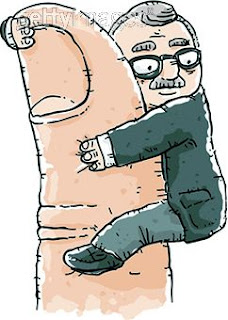 “They’ve bankrupted this country and handed over sovereignty to the IMF!”  That’s what the opposing parties shouted as loudly as they could during the recent election – Fianna Fáil and the Greens had mismanaged the economy and betrayed the men and women of 1916.  They had a point. The south now has a debt that’s pushing towards €200 billion and the chances of paying it off during my lifetime, whatever about yours, are nil. The Easter Proclamation declared Ireland’s right to run its own affairs; the IMF/EU ‘bail-out’ has shackled the southern state to a dungeon wall.

Not a bit like north of the border, eh? While the south is faced with paying off murderous debt,  the north is faced with a reduction in the annual subvention from Britain. Chalk and cheese then. We in the north get money given to us, people in the south are lent money which they will have to pay back at crippling rates. Lucky us, then. Unlucky them. Right?
Well, it depends on what value you place on sovereignty. Supposing, for example, that the IMF/EU had  come into Dublin and literally begun to run the state – sent all the TDs home or maybe allowed them to perform some duties, like running education and the arts and maybe tourism, but had kept them away from raising taxes or shaping foreign policy.  How would that have gone down?  I expect some in the south would have welcomed it. There are those  who think  1916 and what followed was all a mistake. “We’d have been better off staying with Britain. Sure look at the cowboys we elect – we’re incapable of running our own affairs”.
Up north, that’s a familiar refrain too. “What a shower, that lot up at Stormont!”  a lot of people say. “They couldn’t run a piss-up in a brewery”.
So why did we elect them, then?  If the Stormont regime are  idiots, aren’t we bigger idiots for electing them? If  Fianna Fáil and the Greens were incompetents and riddled with corruption, wasn’t it the southern electorate who gave them a chance to practice their incompetence and corruption?  “But the recent election has changed all that – Fine Gael and Labour are now in charge!” Oh really? Check in a year’s time whether the new government has opened the dungeon doors.  My guess is they’ll have swallowed the key.
Behind bail-outs and subventions, though, behind the skills or incompetence of our politicians,  the sovereignty question lurks.  If the south’s affairs were run more effectively and honestly by the IMF and the EU,  would most people there be happy to hand over control? I doubt it. Ditto for the north – we cling to the limited control we have. Even if the EU or Britain were capable of doing a better job – a big If  – we are all growed up now. Adult. And when you’re an adult, you should be given the chance to act like one, decide things for yourself, make decisions. Sometimes our decisions may result in a spectacular mess, in which case we go back and try to do better next time, or elect those we believe will have the honesty and insight to address the mess. It’s called being grown-up, it’s called democracy, and even when it hurts we’re entitled to it. The alternative – to let outside powers come in and make decisions for us – is to remain in a state of arrested development.

View all posts by Jude Collins →
Will February matter in May?
Schools, smells and the inspectorate