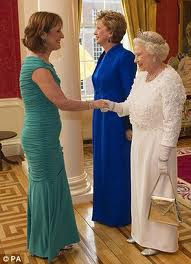 Dear Gerry,
You missed it, you really really should have come. It was brilliant –  I was wearing this green dress and I could tell,  everybody was looking at me – phenomenal stuff!  Granted those tables  were a bit useless  – reminded me of the hotel where Peter and I had our wedding reception. But apart from that it was an OK dining-room. And then when Her Majesty got up and spoke in Gaelic!  I’m still not sure what she said but it definitely wasn’t that chucky thing you people used to use, LOL! It was something nice or maybe funny, Peter said,  like “The prawn cocktail was gorgeous” Or “Your dress outlines your bellybutton, Mrs President”. Whatever.
But OMG, when I heard Her Majesty doing the words in the leprechaun language, I’m like “Wow!”  Nobody heard me because I said it very softly, and anyway all the cameras were all on the McAleese woman and can you believe it – SHE was saying ‘Wow!’ too. Spooky or what?  Anyway, we were all truly moved and touched, to think that  Her Majesty could read those three or four words in phonetic-Gaelic.  And at her age! What does it show?  Well, that she’s got great eyesight for starters. And  it also shows how far we’ve moved on, doesn’t it? She’s sending  a signal. The next time you stand up in the Assembly…What do you mean, you’ve left it?  …Oh. I see. Well, the next time one of your colleagues  stands up in the Assembly and begins speaking in jail Gaelic,  unionists won’t have to shuffle their papers or cough or laugh or anything else, because now Her Majesty has used some of that language, it’s been, well, sort of cleansed really, hasn’t it. Disinfected. Hijacked back from republicans.  I’m starting Beginners’ Gaelic at our local Orange Hall in September. For sure.
The rest of Her Majesty’s speech was even more terrific. She said, no, no, she didn’t say she was sorry, she said there were things that if they had to do again, they’d do differently, and some things, if they had to do again, they wouldn’t do at all. As Peter said to me afterwards, it was a question of filling in the dots for yourself. She could have been talking about the day her troops in Londonderry fired on that unruly mob OR she could have been talking about the Anglo-Irish Agreement!   Really brilliant footwork, Peter said afterwards.
The McAleese woman hugged me, you know – hugged me, in front of the cameras and everything. I swear I didn’t know where to look. Peter said it was a sisterly gesture but sometimes Peter doesn’t know his arse from a Japanese koi carp. My bet is she wanted to feel my dress material so she could guess what it cost. Anyway, in her speech she  banged on quite a lot about the peace process and the people that’d created it, blahblahblah.  But guess what? She never once mentioned you, Gerry. Or Martin.  If you had been there, you could have jumped up and said “Now listen here, Mrs President” – you could have done that bit in Gaelic, couldn’t you? – “I was a key player in the peace process. Me and Martin were the ones that took the real risks for peace”.  Anyway, you didn’t because you weren’t there. Missed opportunity. Shame, really.
I’m not saying everything about the evening was perfect. I wasn’t crazy about the fiddle-de-dee music they played afterwards, and near the end of the proceedings, when Peter stood on the table and did his impersonation of the Doc imitating Willie Whitelaw, I thought to be honest  it was a bit embarrassing. But overall, it was a historic night.  For starters and most importantly because it was the first time people had seen me in ages and my green dress really rocked the room.  And secondly because there must have been about a zillion words  from people, what with before the speeches and during the speeches and after the speeches, about peace and the future and friendship and kisses and make up now and – I loved this bit –  DON’T MENTION THE BORDER! And they didn’t. Not once! LOL or what?
At the end, when we were coming out, we saw Seamus Heaney standing at a wastebasket,  kind of muttering to himself  and tearing something up. Peter went over to him and they had a wee chat for a minute. So in the car I asked Peter, I said, what was that all about? He said it was a poem Heaney was tearing up. “A poem?” I said. “How do you mean, a poem? What poem?”  “The one” Peter said “with the bit  in it ‘No glass of ours was ever raised to toast the Queen’.”  OMG – we laughed and laughed all the way home!
You missed  it, Gerry.
A  tired but happy
Iris

4 Responses to An open letter from Iris to Gerry