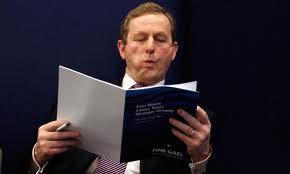 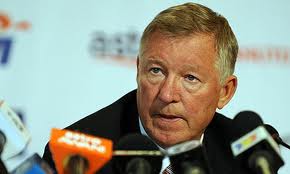 Dear Sir Alex,
You may not know me – the name’s Kenny, Enda Kenny. No, I’m not actually a woman, at least not the last time I looked, ha ha ha. Enda is a common enough name for a bloke here in Ireland although I’m not a common bloke myself, any more than you are, because I’m An Taoiseach of Ireland, which means I’m the boss man here, just like you  at Man U. And like you, I had to wait a long time before I finally got to knock the other lot off their fecking perch, and like  you too I had to listen to those who said I didn’t have it in me, but sure wasn’t it all the sweeter for the wait and being able finally to prove the begrudging gobshites wrong?
Which brings me to my reason for writing.  Let me be honest and say soccer isn’t really my game,  I’m more of a Gaelic football or hurling man: you maybe saw me giving my very good friend Barack a hurley-stick as a present the other day. I offered to give one to Michelle too. I put my arm round her waist and said “How would you like me to give you a camogie stick, Michelle?”  but she misunderstood and Barack had to tell the heavies to get off the top of me or I could have been seriously injured. But here, that’s all in the past. I’m not a soccer man as I say but I am a big fan of your management style and I’m wondering if you could help me out.
Thing is,  a couple of days ago I made a speech introducing my good friend Barack Obama to a big mob of people in front of the Bank of Ireland – no, they weren’t trying to get their money out, you’re a gas man, Sir Alex, you really are.  There was about 25,000 of them there  and I made this speech  some of my aides had written, and I remember thinking at the time, jaysus, this is going down powerful well, me introducing your man Obama and at the same time telling them that I am Il Duce, sort of thing, they must follow my lead and I will take them forward to great things. Only then,  holy Mother of God, what happens next day but some little fecker from some little rat’s hole of a radio station checks my speech, and hasn’t half of it been pinched from a speech by Obama himself a couple of years ago!  What kind of shagging eejit  I must have looked, with your man at my elbow and me like a class of glove puppet or parrot or fecking echo, repeating nearly word for word what he’d said three years earlier.
So of course now I have this fierce credibility gap and that’s why I’m writing to you. I know you’re playing the Barcelona team next Saturday and from what I hear, they’re going to be a hard nut to crack. That means you’ll have to give your boys the most powerful motivating talk that ever was on God’s green earth. So what I was wondering was, would there be any chance of you recording your wee pep-talk and sending a copy over to me? I could then take out the bits where you use names like Giggsy or Scholesy or whatever and put in Paddy and Mick, and instead of a soccer game I’d make it about Ireland and getting off our knees and taking on the world and all that inspirational guff.  And since  your talk would be in the privacy of  the Man Utd dressing room, no nosy fecker could check what you said and the disaster I had last Monday evening could be avoided.
You’re probably thinking ‘What’s in this for me?’ and the answer to that, Sir Alex,  is Plenty. Just name your price. We’re funneling so much money into  European banks, a bung of a million or two directed  towards your good self won’t even register on our financial Richter scale.
Yours admiringly,
Enda Kenny
PS  I meant to say –  that gong you got,   the ‘Sir’ bit? I was sounding out my good friend Her Majesty, the Queen of England and Empress of India when she was over here, and I asked her about maybe extending the system to this state. If she wanted us to rejoin the Commonwealth or anything first, no problem.  The way the plebs here went mad last week during her visit, I’m convinced they’d walk on their knees through pigshit if they thought they’d get a Sir or a Dame from the queen at the end of it.
Finally, may I say I thought you were massive the other night on TV. I saw the way you whispered to your aide to make sure and get the little bollix that raised the question about Giggsy – brilliant! Most of the media here would lick your arse for sixpence,  or my arse anyway,  but I still admire your style. I mean, what’s the point in having power if you can’t put the fear of God into the media?
Finally finally, I want to extend my sincere apologies for that 5-0 scoreline  the Republic inflicted on the Northern Ireland team last night. As a former Rangers man,  you’ll have been outraged at the sight of tricolours being flaunted all over the Aviva stadium, and so was I. I’m going to introduce a no-flags policy (well maybe visiting flags but no home flags, definitely)  and I’m  working flat out to stop players from the north registering to play on the Republic of Ireland team. What do they think they are anyway – Irishmen or something? Anyway, Sir Alex, to echo my very good friend British Secretary of State Owen Paterson, I am profoundly sorry.
EK

View all posts by Jude Collins →
Five things we now know about Obama
Was the death of Mary Travers murder?

2 Responses to Open letter from Enda to Sir Alex