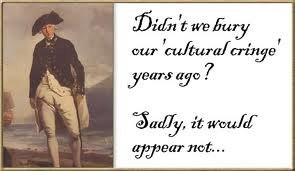 “So what Irish football club do you support?”  The questioner was the guide at Camp Nou, home of FC Barcelona, last summer. Questions like that make you think. Or they do me.
What Irish football club (soccer, that is) do I support? Um, none. I support Arsenal, I told the Camp Nou man, and I could see he was looking at me as if I was a bit unbalanced. After all, I’d just been impressing on him that I was IRISH not ENGLISH, that there was a serious difference.
Did it, does it make sense for an Irishman to support an English soccer team like Arsenal? I suppose you could argue that Pat Rice, an Irishman, has been a prominent figure at Arsenal for years, or that  Liam Brady works with the youth team – but so what? Isn’t there something a bit…colonial about my gazing past local clubs and supporting an English team?  In my defence you could say that Irish club football north and south is crap, and you’d be right. But  it still doesn’t let me off the hook.
And it goes beyond soccer. When I was a child in the 1950s, we used to cavort around the Christian Brothers school yard in Omagh playing…Yep, cowboys and indians. Tkoooo, tkoooo,  wooo-woooo-whooooo, you’re dead! And when I was a boarder at St Columb’s College in Derry, what sort of music did I listen to on my crystal set?  English and American pop music. And when I went to UCD and attended The Four Provinces dancehall on Harcourt Street, what sort of music did the showbands play? Third-rate versions of English and American pop tunes.
I sometimes have spirited arguments with my sons about this.  I try to explain my unease that I should have taken my boyhood heroes from the Wild West of America and my teenage and youthful music form England and America, by-passing things Irish as somehow not worth wasting time on. They argue that it made sense, of course I sought the international best.  What would be the point in cutting yourself off from American film, American music, American mythology, any more than you’d cut yourself off from French cheese or Spanish onions?
Their argument doesn’t quite convince me. My fear is that it’s rooted in cultural cringe. Anything native has to be second-best /primitive, things from the seat of power, the imperial centre, are bound to be better.
If you could untease this cultural cringe without referring to me  as “an evil old cunt” (the thoughtful estimate of one comment-poster a few blogs back), I’d be in your debt.

View all posts by Jude Collins →
Knuckle-draggers and the new Lord Mayor
Our political opponents: they’re so damn CONFUSING…

11 Responses to Still cringeing after all these years?