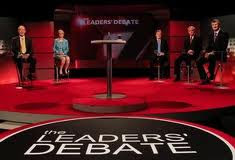 Five things we know after the Leaders’ Debate last night:
1.    Maggie Ritchie has reverted. For a while she had gone a bit Thatcher – the naturally grinding voice transformed overnight into a near-whisper. It mustn’t have worked because last night she was back at her biting-the-big-Halloween-apple best.  As for other features of her speaking style, there’s good news and there’s bad news. The good news is that she seems to have inherited Mark Durkan’s phrase-making speech-writer: “Marty has a case of Peteritis’ and “David Ford is a little lapdog for the DUP”.  The audience loved it.  The bad news is that Mark Durkan’s speeches were peppered with clever one-liners but he still failed as party leader and his party goes on sinking deeper  beneath the waves.
2.    Politics here isn’t nearly as much fun as it used to be. Time was when you could rely on the DUP to go a bit ballistic when it came within 100 metres of a Sinn Féin representative. Now Peter Robinson and Martin McGuinness prop each other up in debates, and any cut-and-thrust is reserved for fellow-unionists or fellow-nationalists.  That can be fun to a degree (see No 1 above) but you have to be careful if you’re Peter Robinson. Tip too much the other way and go on excessively about the  harmonious-working-relationship with the Shinners and your backwoods boys will tear you to pieces for a taig-lover.
3.    TV debates are like knock-out Cup games – anything can happen on the night. Last time out Robinson and McGuinness were streets ahead of the other three; this time Ritchie and Elliott  at least got the best laughs. Especially Elliott, when he said he wanted to put on record that as UUP leader he would not take the post of Deputy First Minister to Martin McGuinness as First Minister. Presenter Mark Carruthers didn’t say “Too right you won’t, Tom son!” but he came near. Very near.
4.    Peter Robinson agrees with me. Not about everything, true, but he does believe that the media are in part to blame for a dull campaign and that starting a leaders’ debate at twenty to eleven and ending it at ten past midnight is  dumb, dumb, dumb. Exactly my point in yesterday’s blog. (Thinks: can I sue the FM for breach of copyright?)
5.    Politics is about policies but it needs emotion too.  Grace under pressure is one thing but dull enumeration of how many houses your manifesto says your party will build can send people off in search of the late-night movie.  I hate to say it but I’m beginning to miss Ian Paisley. Sorta.

View all posts by Jude Collins →
You mean there’s an election in two days’ time? Geddoutahere!
Time to rock the boat and rock the vote

2 Responses to The Leaders’ Debate: Five things we now know