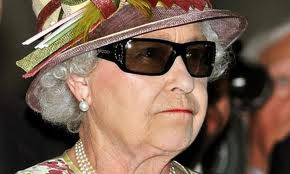 Have Sinn Féin backed off in their opposition to the royal visit? Commentators like Sam Smyth say they have. Smyth figures the Shinners have sniffed the wind of public opinion and are trimming their sails accordingly. There may be something in what he says. I was down in Kildare on Saturday and Sunday, running in the Kildare Half-Marathon ( yes, 1 hour 49 mins, thank you, and you can still sponsor me any time over the next month at http://www.mycharity.ie/event/judes-half-marathon/ , but MUCH better to do it now) …Where was I ? Right. I chatted to several people at the Kildare Half-Marathon and they said they thought the visit was fine, no problem. In fact, a number of them used the same statement, word for word: “It’s time to move on”. Gerry Adams is a politician who know how to make the best of a bad job and he claims that, while still opposed to the royalfest,  what the queen has to say during her visit will be crucial.

He’s wrong. Except the queen were to say something sensational, which she won’t, the core message of her visit is an unspoken one. Every hour of her visit tells anyone who’s listening “Partition is fine”. Spoken words have really no chance against that.

In the south, with the exception of Sinn Féin, all the political parties are indulging in massive doublethink. The people who now speak of friendly and equal relations with our neighbour – people like Enda Kenny and Micheal Martin – are the same people who, in a few short years, will be busting a gut to honour the men who gave their lives for Irish independence. Takes some doing, eh? One part of your brain says “Partition is fine’ and another part yells “We honour the men who died for Irish independence”.

The last time a British monarch visited the south of Ireland was exactly one hundred years ago. That visit too was received with public cheers and flag-waving. Five years later a group of men intent on wakening the Irish people from their sleep-walk seized the GPO and the rest, as they say, is history.  Maybe, along with its unspoken message, this visit is sending an invisible invitation to dissident republicanism: “Do something drastic”.

View all posts by Jude Collins →
Fourteen: is there a worse age for deciding anything?
Queen’s visit: commentators strike a geyser

4 Responses to The Shinners, the queen, a message and an invitation