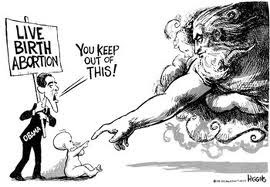 The above is a headline in today’s Guardian  newspaper.  It struck me that the phrase ‘turn back the clock’ was a loaded one, making clear which side of the debate the Guardian  was on.  On the other hand, abortion is one of these topics that  baffles me. Here are some of the things about it that send my head into a whirl.

1.  Some people contend that to abort a foetus is to destroy a human life. Others contend that until the foetus is viable – that is, capable of surviving as a separate entity – it is not a human life. Head-whirler: if up to 24 weeks the foetus is not human life, why is deciding to abort seen as a difficult decision for women (and their partners, presumably)?  You don’t agonise over blowing your nose or cutting your toenails. Why have concerns about flushing out a foetus which is just a  bundle of tissues?
2. Some people (and political parties) are opposed to abortion but make an exception in the case of rape or  incest. Head-whirler:  a foetus is a human life, according to such parties.  So how can it be right to abort a foetus even when it has been brought into existence by rape or incest? Is that not punishing the child for the crime of the father?
3.  Some people opposed to abortion contend that a politician’s stance on abortion eclipses everything else. There are instances in the US of bishops instructing that Holy Communion not be given by priests to politicians who have voted for abortion.  Head-whirler: might not the sum of other policies by a given political party not outweigh the negative factor of pro-abortion/pro-choice? Likewise, does the support of a party for the taking of life in a war in, say, Afghanistan equally disqualify that political party from the moral right to our vote?

I could go on but these three are probably enough to start your head whirling a bit too. Or maybe you have it all sussed out already and have no such confusion? Lucky you, then.

View all posts by Jude Collins →
The OU – doesn’t it care?
Limavady neutral environment? Don’t give the cat a seizure

27 Responses to Abortion? My head hurts