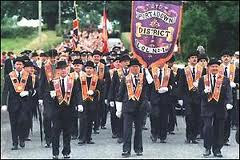 A few years back, a man living a few streets away and myself had an unfortunate difference of opinion. It ended with a punch-up in which I’m afraid I came off second-best. One minute we’re exchanging loud words, the next he’s knocking the stuffing out of me. Even worse, since that time four years ago, he keeps reminding me of it.  Not just on the anniversary, which is coming up,   but I’d say at least once a week on average in the weeks before and after.  And it’s not just a quiet mocking word in my ear either. He comes  round with placards and blown-up photographs and stands outside my house waving them. The placards say things like “Guess who knocked the crap out of who back in 2007?” and the photographs show him in various grinning poses, his hands above his head in a victory clench.
Yes, it is pretty annoying. In fact it’s really annoying. I’ve had different advice on how I should respond. Some people tell me to just stay inside and watch Wimbledon on TV, pretend he’s not there.  Other people suggest a counter-demonstration –  go out with my own placards,  with “Enough is enough” or “Clear off, you!” on them.  A year ago, a neighbour who’s new to the area suggested the three of us meet up – him, me and my conqueror – and come to some mutually agreeable arrangement. I said fair enough, since anything would be better than your man marching around outside my house, but he would have none of it. Said the new neighbour had no right to tell him what to do, he had every right to walk on the pavement and express his views on our little set-to back then. And now I’ve had phone calls from some people, I’ve no idea who, and they’ve offered, the next time he comes round, to start lobbing bricks at him.  Talk about from bad to worse.
By the way: did you see where tomorrow,  Peter Robinson and Martin McGuinness are meeting with the Parades Commission?  It’s just a pity the Orange Order say the Commission has no right to tell them what to do.

4 Responses to Conflict, reminders and don’t tell me what to do