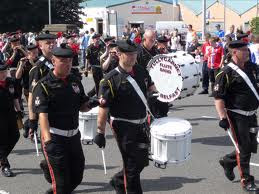 TARA Mills is a presenter on BBC Radio  Ulster’s ‘Good Morning Ulster’ (so good they named it twice) and this morning she suggested to her colleague Gareth Gordon that an awful lot of people would be shocked. Gareth agreed. The news they both figured people would rock a lot of people back on their heels was that the Orange Order is considering whether to sanction or even expel  UUP leader Tom Elliott and Deputy Leader Danny Kennedy, because they  attended the funeral Mass of Catholic police officer Ronan Kerr.
Wrong, Tara. Wrong, Gareth.  Nobody’s shocked. Can there be anybody in our dear statelet who doesn’t know that the Orange Order has eye-crossingly negative views about the Mass? ‘An act of Popish idolatry’  pretty much sums it up, which Orangemen must not attend or even countenance, whatever that means. They’ve also got strong views on Catholics, or people who marry Catholics, or people who have parents Catholics, or …you get the idea. If there’s shock involved, it’s that the two UUP men managed to screw their courage to cross the chapel threshold, not that they might be penalized by the Orange Order for so doing. And whether they’d have attended such a funeral Mass if Ronan Kerr hadn’t  been a policeman – say if he’d been an ordinary Catholic from Derry or Belfast or Newry –  we can only guess. Want my guess?  Not a chance.
But let’s be charitable about these anti-Catholic stances and blame the thinking behind it on  the Reformation. Maybe that’s where this “Come ye out from amongst them” line originated.  The conviction of people like Ruth Patterson and Gregory Campbell and the massed ranks of   Orangeism/unionism that they are so morally superior to Catholics/nationalists (after all, that’s what the 3,000+ drum-banging sessions are all about) that sharing a civil word let alone sitting in the same church pew as idol-worshipping taigs is a  painful and probably sinful experience – it has to have its roots somewhere dark and distant.
And in case you think it gives me pleasure to talk like this about the Twelfth of July and those who celebrate it,  think again. All my life I’ve celebrated it myself. It’s my birthday.  Nice timing, Mammy.

View all posts by Jude Collins →
How can we use this grief?
The McArdle story: the last paragraph