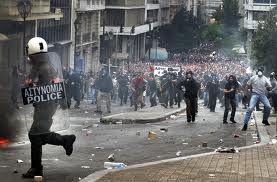 The Greeks, it seems, are revolting.  Out on 48-hour strike, clogging the streets, waving placards, ATTACKING POLICE. But hold on, they’re not all like that,  these are a minority who’ve spoilt it for all the rest…No, sorry, that’s what you say  when you’re a headmaster ticking off pupils. No, this is a minority that is “intent on violence” , in the words of a radio report yesterday.
Who were these violent people that didn’t agree with a government  poised to impose austerity cuts of (wait for it) £28 BILLION?  Anarchists.  Bet that put you off them a bit. Anarchists – guys who  run around creating, well, anarchy. Chaos. Total mayhem. Right?
Well wrong, actually. Anarchists have probably done more thinking about how we should organize and live our lives than many of us have.  Like socialism or capitalism or Marxism, it’s a political school of thought that believes the state does more harm than good to its citizens. Not a view I share but you can see why they might think that way. In fact, it’s a wonder ALL the Greeks aren’t anarchists. And all the Irish living in the twenty-six counties. When your government has let you down the way the Greek and Irish governments have let down their people,  a stateless state of anarchy must surely seem an attractive alternative.
But will the violence in Athens  push the Greek government to stand firm and saddle its citizens with yet more massive debt they can’t possibly pay (sounds familiar) or will it impress on them that you better not give people too much of a financial mugging or they may start to reach for the bricks and bottles?
What’s that? You don’t believe in violence? Well, like it or lump it,  it’s happening in Greece, and while the law-abiding (and cowardly) side of me wants to tut-tut along with you,  another side of me wonders how else the Greeks could possibly have got  the attention of a government intent on implementing a plan that will make economic recovery impossible.  Come to that, there’s a side of me wonders how many promises the present Irish government will have to break, how many policies based on austerity-for-the-have-nots/bonuses-and-fat-salaries-for-the-haves will have to implement, before  the Irish people of the twenty-six counties start reaching for rocks and petrol-bombs.
One final, undeniable fact: if the Greek anarchists hadn’t engaged in violence yesterday, the world wouldn’t be focusing on events in Athens. They don’t send out TV cameras to JFK  airport to film the planes landing safely, you know.

View all posts by Jude Collins →
In praise of curvature
Booze and the Twelfth – inextricably linked?

5 Responses to Those revolting Greeks