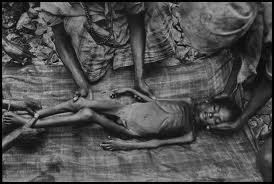 There are times when I can’t watch what appears on TV. I groan and look out the window or at the floor or at the ceiling – anywhere but the screen.  And there are times when I think our society – the Western World – is doomed. Like the Roman Empire, it’ll crumble and dissolve in its own excesses.  These two come together – unlookable-at TV and a sense of global foreboding –  when they show shots of babies from starving Africa.
Remember Feed The  World? Our children were small at the time and at the school’s Christmas pageant thing, the youngsters sang “Do They Know It’s Christmas?” and it would have cracked a heart of steel. Pop stars in those days were clambering over each other to get in on the good deed, it really seemed as if we had turned a corner. We really were going to feed the world.
When was that – over twenty-five years ago? And now we’re told that anything up to half a million people in Somalia are suffering from terrible malnutrition. That’s a polite word for not enough food. And they show these babies with their enormous heads and enormous eyes and enormous bloody flies crawling all over them, and you just know those babies are going to be dead inside a day or two.
It’s been going on, this latest crisis, for I don’t know how long – a week, two weeks, a month? You ‘d think it’d have dominated our screens, bashed our brains, bruised our hearts. But it hasn’t. Instead we’ve seen MPs in a lather of moral outrage because an old media mogul with an obscene amount of money had people in his employ hacking  phones. You had the Prime Minister of Britain getting very righteous in the House of Commons about how he wouldn’t have hired Andy Coulson if he’d blahblahblahgblah.  He’s just back from Africa – South Africa – but not a word about the people there dying in their tens of thousands. Not a fucking word about it.
And no, it’s not  Nature’s fault. No matter how many cracked earth shots they show, we all know in our well-fed guts that those people are poor and starving and dying because we in the West, to varying degrees, are rich and well-fed and alive.  We really do deserve any catastrophic fate that will eventually befall us and/or our children and/or their children, because we know what’s happening and yet we elect people who literally don’t give a damn, get outraged about eavesdropping and bribery but don’t even feel mass hunger and death is worth mentioning. Oh no, sorry. The British something or other says other countries have failed to help, unlike Britain. Dear God.
At this moment Rupert Murdoch is a desperate man. So good news, Rupert. Want to restore your popularity?  According to Forbes Magazine, in March of this year you were worth $7.6 billion.  I have a plan. Bring that down to an even $5 billion – you won’t feel the difference, I promise you – and use the $2.6 billion to save most of those lives in Africa. If you do, your good deed will surely outweigh your sins and the hungry people of Africa will revere you for ever. And unlike the rest of us, you’ll have put your money where their starving mouths are.
It won’t solve the problem –  this crisis aside, almost 16,000 children in the world die from hunger every day –  but it would give those of us in the West  time to look at ourselves and see if being so insanely, throwing-up selfish is a good way to run the world.

3 Responses to Groaning at what’s on television