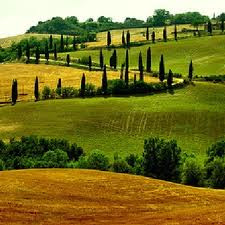 For the past few weeks I’ve been in communication with a younger Italian woman. The present Mrs Collins doesn’t seem to mind – in fact she encourages me in this relationship. In a week’s time, the young Italian woman will have come to our house and climbed into our bed, a fact that doesn’t cause the present Mrs C any sleepless nights either, if that’s the term I want. In fact she’s getting quite excited at the prospect. That’s because, when the Italian woman is in our bed, we’ll be in hers in Tuscany. We’re doing a house swap. (Why, what did you think we were doing?)

When I tell people about this house swap, they either say “You’re letting someone you’ve never met into your house? On their own? But but but they’ll be able to look at all your…things!” Or else they kind of suck in their breath and look at me sideways and say “Great – although it’s not something I could ever do”.

This’ll be our third time to house swap. The first was three years ago with a family from Sonoma County in California, and while I wouldn’t want to speak for the two attorneys and their sons who came here, we had a terrific time in the California wine country. We’d sit on the deck of their house, looking across the gorgeous green valley watching the hot-air balloons drift by in the sunshine. In between visits to San Francisco, that is. Last year we did a swap with a family from Perpignan – more wine country. I still have golden memories of going for an early-morning jog between two villages, with the only sound the swish of fifty cyclists clad in colourful lycra, the only sight vineyards stretching away on either side of the road and above us a cloud-free sky drenching us in sunshine. Oh, and when we came back home, our house was cleaner than we’d left it.

So Tuscany holds little fear and a fair bit of anticipation. Living in someone else’s house is beyond interesting – you get a sense of the person, their passions, their work, their family, their neighbourhood. It’s tourism with the wall between you and the locals breached if not torn down: you’re literally embedded in the community. Why more people don’t do it would, as the psychiatrist in Fawlty Towers said, provide enough material for at least two conferences.

Meanwhile I’m wondering should I draw the Italian woman a map to show her the location of points of interest, or would it be better giving her a written description of the locale?

2 Responses to My relationship with a younger woman