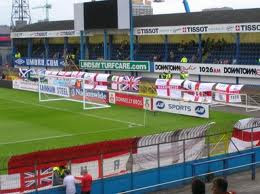 Does the name Kenneth McCallister ring a bell for sports minister  Caral Ní Chuilin?  I suspect it might. It’s the name of the central character in Marie Jones’s play, ‘A Night in November’, which as you probably know is about that famous night in 1993 when the Republic of Ireland turned up to play Northern Ireland in Windsor Park. If the Republic won, they got the pleasure of going to the World Cup finals in the US; if Northern Ireland won, they got the pleasure of stopping the Republic from going anywhere.  In the play, the  viciousness of the bigotry  at Windsor Park that night drives McCallister, himself a Protestant unionist, to question his political and social identity. The play’s a work of fiction, based on a jagged reality which was experienced by the small number of Republic supporters who turned up at Windsor to cheer their team but ended up afraid and suddenly aware how deeply sectarian hatred here runs.
Or ran.  Because we’re told that things have changed at Windsor Park. People who attend games there – unionists  I know – assure me they have. They say the sectarian singing, all the stuff about ‘up to our knees in Fenian blood’ – is  gone. C’est fini. Windsor Park now welcomes all sections of the community.
Maybe so.  I haven’t ever been to a game in Windsor Park so I don’t know. Why haven’t I been? Because I don’t support the Northern Ireland team.  If the Windsor Park crowd have stopped singing bigoted songs I’m glad,  for their sake more than mine. If they detest those who threatened to kill Neil Lennon if he played in Windsor Park, ditto.  But I still won’t feel any magnet of attraction pulling me to Windsor Park. To attend and cheer on the Northern Ireland team would, in some odd way, be to cheer on the notion of Northern Ireland as a state, and since like most nationalists/republicans I don’t really want a Northern Ireland state,  that wouldn’t make sense.
But now Caral Ní Chuilin has said she’s going to Windsor Park for the match between Northern Ireland and the Faroe Islands. Some unionists have praised her for so doing. The DUP’s David Hildich says it’s “courageous” and “a step forward”, although he feels it’s a pity she won’t be “enjoying all of the pre-match atmosphere”.  Translation: we’re glad she’ll be turning up, but  why can’t she come and stand for ‘God Save The Queen’ as well?  Some nationalists and republicans also think well of her for reaching out to unionism, others feel it’s a step too far. But didn’t Edwin Poots attend a Gaelic match – minus, of course, ‘Amhran na bhFiann’?  There’s a balance there, you know.
But let’s imagine Windsor Park as having stopped the chanting, stopped the union flags, maybe even left out ‘God Save The Queen’ – would nationalists then flock to it? Unlikely.  Sport and national identity are closely linked here,  a fact that seems to have escaped the N Ireland manager Nigel Worthington, who seems baffled by players like Darren Gibson opting to play for the south.
But the immediate question is not one about sport or even identity : it’s about respect,  for yourself as well as others. Caral Ní Chuilin is the sports minister so it’s right that she show respect for all sports,  including those not part of her cultural background, just as Edwin Poots showed respect for Gaelic games when he, as sports minister,  attended a game.  Poots was warmly received by the Gaelic games people. Under scrutiny now is whether, fresh from a semi-frenzy over the appointment of the sports minister’s special adviser, the Windsor Park crowd can prove there’s a day-and-night difference between 2011 and 1993.