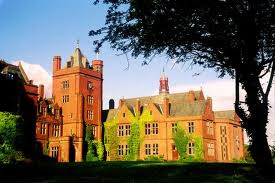 With good news you gotta take the bad news. So good news this morning. It appears that Campbell College in Belfast is launching a major drive to recruit boarding pupils from the south. Excellent. The more that people north and south get to know about each other, the less likely they are to believe in stereotypes . The bad news? Well, you’ll have to cough up over £10,000 (€12,500)  a year to send little Sean north of the border. That’s the boarding fees at Campbell. Bad news, eh? But good news: it’s a lot less than if you sent him to Clongowes Wood in Kildare (nearly €17,000 p a) or Blackrock College in Dubline (€17,500).
Not only are the fees cheaper – sorry, less expensive – nothing cheap about Campbell – but  – more good news – you’ll be exposing him to the proud tradition of rugby playing at Campbell – treading in the footsteps of great men – the exquisite Mike Gibson and current international Paddy Wallace, to mention two. The bad news?  Well, Sean will never develop Gaelic football or hurling skills. That’s because Campbell College, in common with all Protestant schools in the north, has not and will not play any part in competitive Gaelic sports.
There used to be something on the NI Curriculum called EMU – Education for Mutual Understanding. It seems in some quarters, on the sporting level, EMU is as dead as the dodo.