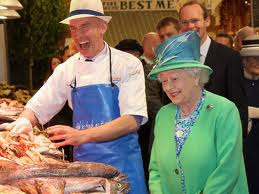 George Orwell was very good on memory and politics. In both Animal Farm  and 1984, he shows how those ruling had a way of saying something and then, when events turned out otherwise, saying something different and/or denying they’d said the original thing. They did it so convincingly, the animals/people ended up wondering if they’d imagined  that the original thing had been said at all.

Oh George, thou should’st be living at this hour! Remember when the visit of QE2 to the south had been announced, one of  the BIG reasons given for having her come calling was that it would help tourism? “A visit like this gives us media promotion that money just couldn’t buy!” we were told. People would see the royal person visiting various places and they’d be so excited by the lovely – and peaceful, don’t forget peaceful – background, they’d be online booking their holidays before you could say “House of Windsor”. Well now.  Today’s Irish Times  tells a different story.  It seems there was no upsurge in British visitor numbers, according to Fáilte Ireland CEO Shaun Quinn.  In fact,  some half a million fewer  Brits made their way to Ireland compared to last year.  This despite the fact that “Fáilte Ireland has made attracting back British visitors a key part of their strategy to return the tourism industry to growth”.
Two thoughts perhaps. One, let’s not be quite so trusting with the world of officialdom/the media. If I heard once I heard ten times that QE2’s coming would do wonders for tourism figures. Because people keep saying something doesn’t make it true. Two, let’s hope Fáilte Ireland’s campaign for next year goes with the slogan “Ireland – a monarchy-free zone”.  With a bit of luck it should add around half a million visitors from the neighbouring island.

View all posts by Jude Collins →
Do buildings talk?
Marian and the colonel