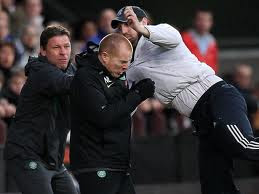 Tom Lehrer, they say, gave up on satire the day they awarded the Nobel Peace Prize to Henry Kissinger, on the grounds that nothing he Lehrer could compose would rival the absurdity of reality. He should have been at Tynecastle stadium in Edinburgh on 11 May  this year. That’s when a Hearts supporter called Wilson, followed by the cameras, ran to the area where Celtic manager Neil Lennon was standing, lunged at him and struck him on the head. Today in court,  the charge that Wilson had been guilty of a sectarian assault aggravated by religious prejudice was dismissed.

I mean, as my granny would occasionally say, wtf? Wilson admitted in court that he had lunged at Lennon, that he’d struck him on the head. But was religious prejudice involved? Nah. Had he shouted a sectarian remark on the occasion? Nah. Not even one? Nah. In fact, Wilson was just, sniff and sob, overcome with remorse. “I regret every moment of it” he told the court. Especially the bit where he was pulled off Lennon, presumably. But no, seriously, he assured the court that it was “not my normal behaviour”.  Eh? Cue another granny wtf.  He doesn’t normally jump on Celtic managers. Or thump them on the head. And not shout sectarian remarks at them. Well that’s all right then. Dunno why they bothered to bring the man to court. He’s obviously a deep-down decent man who got a wee bit, um, over-excited.

So. You may be sure those who detest Celtic, hate Lennon and send him bullets and death-threats will have taken note of today’s proceedings. Even if the cameras are trained on you, you’ve a good chance of getting off if you say you don’t know what came over you, it’s not a bit like you, and sectarian, no no no no no.

Oh Tom Lehrer – you thought you’d seen it all.  No you hadn’t.  Say hello to Mr Wilson.

View all posts by Jude Collins →
The recession – treading still-deep water vs bashing your shins
Libya: the truth, the half-truth and nothing but the half-truth

12 Responses to The #Celtic boss story: you couldn’t make it up