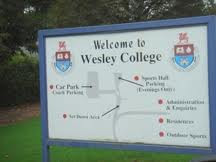 There are two apparently contradictory reports in the  Irish Times  this morning. One says that house prices in the South excluding Dublin have fallen 40% since 2007. In Dublin the prices have dropped 49%.  Clearly, an awful lot of people are an awful lot poorer. The second report notes that the number of pupils being registered in private schools in the state is increasing. In St Gerard’s in Bray, for example, one of the most expensive fee-paying schools in the State, enrolment is up this year again, and over the past decade the school has increased its intake by 28%. Mount Anville, Wesley College, Belvedere – all up.  If you want to send your off-spring to a school like this, it’ll cost an average of €5,000 if the little dear is a day pupil and over €15,000 if s/he is a boarder.
How can this be? How can people be suffering massive losses in terms of the value of their property while schools – which have in many instances raised fees – take in higher numbers? Simple: this recession is like a swimming pool. If you’re in the shallow water – you have minimal resources – when the water-level takes a sudden dip, you’re going to be banging chin, elbows, knees off the bottom. If you’re in deep water – you start with plush resources – you can take a huge dip in levels and still have lots of room to swim freely. Both groups of people – those at the top and those at the bottom – will complain bitterly at the collapse of the economy. But it’s the ones that have little who’ll really end up getting hurt. The ones with plenty will go on staying afloat, doing damn near everything the way they used to.
Indeed, indeed – the world is ill divided, them that works the hardest is the least provided.

View all posts by Jude Collins →
Donegal Gaelic football team – they gave us a laugh or two
The #Celtic boss story: you couldn’t make it up