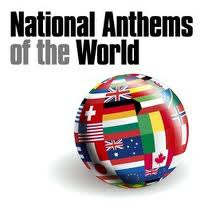 My last blog on Windsor Park seems to have touched a sore spot with some people; once the name-calling starts you know you’ve hit home.  One of the main problems with Windsor Park, although not the only one, is that the British national anthem is played before games, even though the Good Friday Agreement has acknowledged the right of nearly half of the north’s population to see themselves as Irish.
At the same time it’s a complicated question, the whole national anthem thing. There’s the cringing embarrassment  as the camera pans along the faces of Irish soccer players during the pre-match playing of Amhrán na bhFiann:  most of them clearly haven’t a clue what the lyrics are, in Irish or English.  Then there are the Gaelic matches at Croke  Park and elsewhere, when a sizeable number of gobshites   feel they owe it to their county to start roaring encouragement  some ten bars before the end of the anthem. And is there another country in the world that’s afraid to play its national anthem in case it’d upset some of its own players an/or supporters, and puts in its place something as awful as ‘Ireland’s Call’?
Recently, in fact, there have been demands that the Irish national anthem be removed altogether – excised from every occasion because its lyrics are too bloodthirsty. Since no more than one in ten Irish people know  the words, that shouldn’t be a problem, but apparently it is.  Yet if you check the verses, the most bloodthirsty line is surely “ ‘Mid cannon’s roar and rifles’ peal’.  Tame stuff compared to  the American national anthem, which has ‘the rocket’s red glare, the bombs bursting in air’, quickly followed by “Their blood has washed out their foul footsteps’ pollution/No refuge could save the hireling and slave/From the terror of flight, or the gloom of the grave’ –  in case you missed the point.  In Italy, where I am now, they sing what in Italian sounds lovely but in English translates as “Let us joint together – we’re ready to die/Let us join together – we’re ready to die/Italy has called!/ Let us join together – we’re ready to die/Let us join together – we’re ready  to die/ Italy has called! / YES!’  I think we get the message there. And the anthem that’s taken up so enthusiastically in Windsor Park?  Middle-range bloody, I think: ‘O Lord our God arise/ Scatter her enemies/ And make them fall’.  Sounds to me like a call on God to do a spot of killing, except you interpret ‘fall’ as stumble and graze their knees.
The fact is, the Irish national anthem is no more bloody-minded than most others. What’s behind the call for its abolition is not the bloodthirsty bit, it’s something else  – specifically two lines before the bit about the cannon’s roar.  They go: ‘See in the east a silvery glow/ Out yonder waits the Saxon foe’.  Geddit? Our national anthem refers to England/Britain as a foe. And as we all know, especially since that visit from your woman in May, we’re not foes at all, we’re friends now, and whatever you do, don’t mention the war. Or the constitutional question. Or political jurisdiction. Or five thousand British troops.
If I’m honest, though, I too would like to see the Irish national anthem changed,  along with every other national anthem in the world that glorifies violence or encourages the domination of the weak by the strong. Maybe the UN could do it – a sort of simultaneous musical multi-lateral disarmament. That might bring a few more taigs to Windsor Park.

View all posts by Jude Collins →
Windsor Park – changed, changed utterly?
“We don’t want to fight but by jingo if we do…”

One Response to Those bloody anthems