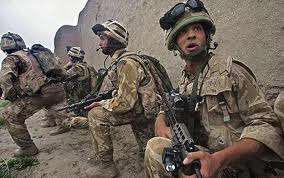 If you’re interested in the use of words,  check a headline in today’s Guardian: “Cross-party committee attacks defence cuts”.   Beneath that it says “Defence select committee warns Britain’s influence will decline unless the armed forces get adequate resources”. I’ve quoted the psychiatrist in Fawlty Towers before and I’ll quote him again: there’s enough there for a whole conference.
Defence.  It’s a nice word. Most countries use it for the organisation that takes young men (and now some women) to train them so they become really good at killing.  It makes them fit, it makes them obey, it sends them (in the case of Britain and the US, to mention two) to countries far away  (or sometimes, as we know, next door) to do some killing or at  least some lethal threatening. They have to call these people something so they call them the Defence Forces.
The  Guardian article notes that the cross-party committee is cross with government ministers who promised that “cuts will have no effect on what the armed forces can do”. Pensions may suffer, wages slashed, benefits curtailed, jobs eliminated, but none of this will apply to the armed forces because…well, because they need to be able to kill people and the risk that they themselves might be killed must be minimized, otherwise they’d be no good at killing,  would they? You know it makes sense.  The report quotes from the National Security Council  (there’s another nice word, ‘security’) which says that  ‘Britain’s national interest requires the rejection of any notion of the shrinkage of UK influence in the world”.
Eh? Isn’t it a bit late for that? Britain’s influence in the world has been shrinking since  – let’s be generous – the Second World War. That’s nearly seventy years ago. Yet now we have the opposition attacking the government for not spending more on defence forces, because those defence (i.e., attack) forces need the money to keep Britain’s influence from shrinking, even though Britain’s influence has been imitating a deflating balloon over the last century.
It’s like party night at a verbal contortionists’ conference. Defence= attack,  shrinkage = non-shrinkage, influence = we need to be able to send guys with guns anywhere in the world anytime we chose.
There’s only one thing madder than the politicians who spout such deranged lies and that’s the population which believes them.