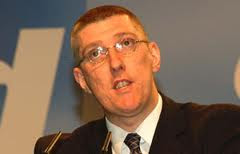 Ed Koch when he was mayor of New York used to call to crowds as he passed them: “So, how am I doin’?” John O’Dowd who has been given responsibility for two jobs over the next six weeks with no raise in pay hasn’t time to ask that question so I’ll do it for him. How’s he doin’?

1. He’s not beautiful. Some people think looks shouldn’t matter, aren’t relevant to your work except you’re in a beauty contest but  (sigh) it ain’t so. In politics, how you look matters. That savage British satirist Steve Bell used to present George Bush as a monkey and David Cameron as a contraceptive. What he would do with John O’Dowd I shudder to think. How you look counts. Alas O’Dowd, like the rest of us, can do damn all about that.
2.  O’Dowd is a very effective media performer, and not just on radio, for which like your humble servant he has a great face. He usually has the facts to back his argument, he presents his case fluently and he does it in a non-angry and non-dour way. In fact, he is such an effective TV performer, you stop looking at him and start listening.
3. These days he’s making a few pigeons in the education dove-cote (that is a word, isn’t it?) flutter and coo or whatever sound startled pigeons make. He says there are 85,000 empty places in our schools and something needs to be done about it, including facing the possibility of school closure. He says some schools are failing pupils and their parents, and that can’t be allowed to continue.

I’m not sure – yes I know, I know, I SHOULD be sure but druid do ghob  a minute, OK?  – I’m not sure what his position is on Peter   Robinson’s plan to do away with Catholic education.  But on the  85,000 empty places, he’s dead right – something needs to be done, including the possibility of school closure (we’re talking public money here) PROVIDED the empty desks will still be empty ten years up the line. I add this caveat because time and again, the education authorities have made cuts in training teachers and school provision, only to find a few years down the track, blimey, the populace have been busy congressing and producing a demographic bulge that demands more, not less places, more not fewer teachers. As to schools that fail pupils: of course that shouldn’t be allowed to continue. To do so would be to fly in the face of common sense.

But there are two elements  O’Dowd hasn’t, as far as I know, addressed. First, are the ways in which success and failure  in a school are measured accurate? I say that because I’ve seen the Department of Education inspectorate in action, I’ve heard the stories of many teachers about visitations from these people, and I’m convinced that they frequently measure the wrong things with wonky measuring sticks. What’s more,  they tell schools what they’re doing wrong (and, to be fair, right) but they refuse to tell the schools how or even work with the schools to make things better. It’s like a dentist hoking in your mouth, telling you you’ve a tooth needs extraction and then showing you the door.

So I admire O’Dowd as a political performer – he is top-drawer, and I wouldn’t be surprised if the Shinners one day make him their leader. Likewise I think he’s identified two major problems in education and has had the courage to say what should be done. But until he makes an effort to grasp the nettle of how we identify educational success and failure – and it is a nettle, a bloody big brute of a seriously-stinging nettle – a core problem will continue. Likewise, until he tells the inspectorate that their job is to help make teachers better,  the reign of inspectorate terror which hobbles the average teacher will continue. That can’t be good for education.