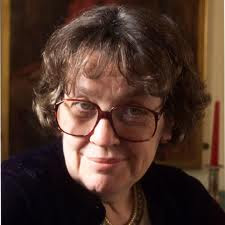 I was on ‘Jeremy Vine Show’ (BBC Radio 2) this morning – briefly. That’s how radio is – brief. You go in with a dozen points to make and end up lucky to get three of them articulated.

My sparring partner was Ruth Dudley Edwards. Ruthie and I go back a long long way, to the early 1960s when she and I shared the same History class in UCD. Ruthie, however, had the advantage that her da was the Professor of History, while mine was back in Tyrone cattle-dealing. I suppose all of us were sort of geeky in our youth but Ruthie was strikingly mouse-like then. She was the constant girl-friend (you saw one, the other wasn’t far behind) of a guy called Paddy Cosgrove, who was a bit weird-looking but very clever. He was a top man in the in-crowd who ran the debating society and overawed us culchies into resentful silence.After graduating,  Paddy and Ruthie married and moved to London where Paddy became a devout Conservative, writing a  fawning biography of that great and good person, Maggie Thatcher. I’ve read somewhere that he was even tipped to secure a post in her Cabinet, only for one reason or another (allegedly) he took to the drink (nothing to do with having  married to Ruthie, I’m sure) and spoiled his chances by, the story goes, getting pissed on a particularly auspicious occasion and, while sharing a taxi with the great lady, throwing up into her lap. Some sins there is no forgiveness for and this was one of them. He and Ruthie divorced at some point and he later died. Meanwhile Ruthie goes on, writing admiring accounts of the Orange Order (‘The Faithful Tribe’) and going pale with rage at the very mention of the word ‘republican’. She didn’t say today that she’d like to boil Martin McGuinness in oil , but she didn’t say she wouldn’t either. One republican I know is convinced that Martin McGuinness is running for the presidency solely to annoy Ruthie.

But hey, it’s fun catching up with old class-mates. I doubt if she remembers me though, at least not from back then – she moved at a MUCH more elevated level, sandwiched securely between her da and her very clever boy-friend. (Cue the opening chords of  ‘Those Were The Days’…)

7 Responses to Ruthie and me – now it can be told