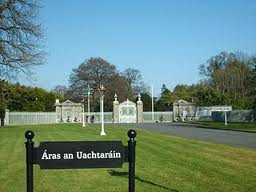 Thank you for your letter of congratulation and you are indeed right, Ireland couldn’t possibly have elected a more intelligent or cultured man than myself, or, let me add, one who has published more books.  So, dear Comrade, this grey October morning, I unite myself with you in the solidarity of being over the moon. It was as you point out a singularly bruising contest but let me add that I maintained my dignity at all times,  don’t you know, even when that nightclub bouncer creature looked home and, as the cliché has it, dry. Happily most of the blows aimed at me  went over my head and struck an opponent which was, as they say now, a bonus. And so today, I gird my loins (such as they are) for movement into the highest office in the land.

Which is as it should be.  Mine, as you doubtless are aware, has been a life dedicated to things of the spirit rather than the flesh, to the cause of culture and not cute-hoorism. I am proud to number among my friends and, might I modestly add, admirers,  people from all over the world, not least the gallant rebels of Nicaragua and the Middle East. When called on  I was never  found wanting in my willingness to speak out in favour of such oppressed people and have stood  shoulder to shoulder or, where a box was not available, shoulder to thigh with these men  – and women, of course women, indeed – men and women of courage in their search for those pearls beyond price, freedom and equality.

You may ask me what I mean by the word  ‘freedom’ and ‘equality, and while I am tempted to respond with the words of my good friend Kris Kristofferson,  that freedom’s just another word for nothing left to lose, I choose rather to use the term as it was used in classical Roman times, that is, as an identifier, an innate feature of the citizen’s rights in our new Republic. And let me add to that my complete and utter rejection of the term ‘republic’ which we sometimes hear prated by the rag-tag-and-bobtail ruffians of Belfast and  Derry and south Armagh. These people have the temerity to use such sacred words as ‘liberty’ and ‘unity’, when in fact they have never studied Latin as I have, when they wouldn’t know their in toto  from their ad nauseam.  And yet they dare to speak of liberty!

And while I find myself on that subject, under my Presidency there’ll be rather more discrimination from now on about who is allowed to tramp  over the lawns of Aras an Uachtarain.  We will of course maintain our sympathy and solidarity with the oppressed unionist people of Northern Ireland, but if Jackie McDonald or anyone else thinks they’re going to be down here deafening the neighbours with their singularly tuneless Lambeg Drums every Twelfth of July they’ve got another thing coming.  Likewise with this presidential habit of continual tripping northwards, sadly  a feature of my predecessor. I wish to imply no criticism or censure, but  in these times of austerity we must preserve as much as possible of the national budget, not for northern jaunts but for things artistic, for the ethereal joy of sean-nos singing and the glory of the Saw Doctors in full flight.  Besides, I once found myself standing beside the aforesaid Mr McDonald  (Why incidentally are so many of these people called ‘Jackie’?), and let me be honest, I found it an unnerving experience.  So no more drum-pounding and parading about the Park, frightening the squirrels and deer every Twelfth.  What guests I have will be a carefully selected number, including such sensitive musicians as  the Saw Doctors and Bono, and even reaching out as far as the likes of  Paul Brady.

Finally, people ask me what sort of presidency will mine be – what will be its distinguishing theme? I must tell them and tell  you that if I were to sum it up in one word, that word would be ‘Towards a New and Better Republic’. Yes indeed, that’s five or six words, but let’s not quibble, dear comrade. The point I want to emphasise is that I will help the Irish people  rediscover their Irishness and together we will build a new republic, a new Jerusalem you might say, inclusive of all citizens who have documented evidence of an IQ within 10 points mine and who live within the boundaries of this 26-county state we feel proud to call Eire. Together we will imagine a new Ireland, a new age, in which men dare to dream dreams and where those who, like myself, have written and published books of poetry will be given their rightful place as na crionnaí  or council members in my brave new tomorrow.

What more can I say, comrade? If it wasn’t for this blasted knee I’d be doing a moon dance across the Aras ballroom this very instant. Vincemeros!

Yours in unflinching solidarity