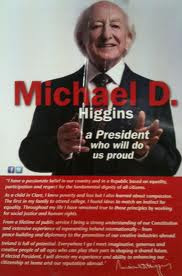 I remember Barack Obama’s victory speech in Chicago three years ago.  Bet you do too. The vast crowd, the faces gleaming with expectation, the soaring oratory, the tears of joy and pride. One of our own, the black people said, one of our own. Stirring stuff. There was more stirring stuff in Galway last night – Eyre Square crammed, flags and bands, cheers and tears, and of course Michael D Higgins’s soaring oratory. One of our own, the Galway people said, one of our own.
Today, with just a year before the US’s presidential election, Obama is taking a pounding in the polls. I’m not totally surprised. “Yes we can!” stirred the blood, including my own, but I never quite understood it. Can what? Beat Al Quaida? Rethink American foreign policy? Start feeding the one in six American children who go to bed hungry each night? What?
So let’s take a peek at  Higgins’s victory speech.  He refers to the “many valuable suggestions” of other candidates  “which I hope to include and encompass over the next seven years”.
He spoke of “an inclusive citizenship, which is about equality, participation and respect” and his “vision of a real republic where life and language, where ideals and experience, have the ring of authenticity, which we need now as we go forward”.
OK. There’s loads more but that’s enough. Once I hear a politician say “going forward” I know s/he is doing the equivalent of Harold Wilson lighting his  pipe during a TV interview – playing for time so he can think of the next thing to say.
Right. Those many valuable suggestions  by other candidates that the President-elect is “hoping to include and encompass”. Which ones? And why did he not tell us they were valuable until now?
That “inclusive citizenship” thing. I’m an Irish citizen. How will the new President work to make sure I’m included in, for example, voting for his successor? Can I have an example as to how I will be treated with equality and encouraged to participate in (presumably political) life ‘down there’? And is the “real republic” he has in mind the same one that Tone, Pearse and Connolly talked about? At a basic geographical level, how many counties will it have?
What does a republic “where life and language, where ideals and experience have the ring of authenticity” look like? Come to that, what does the statement mean? Anything? Or is it another “Is feidir linn!” – “Yes we can!”?
You’re quite right – it’s not the done thing to be critical of someone newly elected,  but  frankly I don’t give a damn for the done thing. Higgins himself would surely agree that words must mean something.  Emotionally I thought his victory speech, like Obama’s, was eloquent and passionate, and you could see why those Galway people were getting choked up. In terms of meaning his speech was mainly  smoke and mirrors.

View all posts by Jude Collins →
A letter from the Park (or near as dammit)
Wearing the poppy – it’s your right, you know

6 Responses to Michael D’s victory speech – "Is feidir linn!" or what?