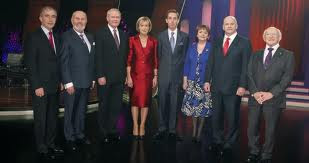 I watched a lot of twitter during RTÉ’s presidential debate and some tweeterers (twitterers? twits?) got a bit sniffy about holding this debate on the same show as Jedward.  Yeah, right, Jedward should have complained. Big deal. You’re a politician, you go to the places where people gather. And in Ireland, God help us, we gather at the Late Late Show.

So – how did they do? Weelllll – largely dully, if there’s such a word. Like a team in the Champions’ League in the early stages of a match, they were more intent on not making mistakes than scoring goals/points. To be honest, I found the tweets or at least some of them, mostly the rude ones, more entertaining than what was on my screen. That said, some candidates did better than others. So let’s do the reverse thing. Just one man’s judgement, remember.

7:  David Norris.  I used to enjoy watching Norris on my telly – he was always jolly and I kind of liked the combination of good humour and pleasure in literature. But in recent years he’s been turning into a travesty of himself, and that bloody lepping around on Bloomsday has got increasingly on my wick. But doing what I can to set aside any such pre-Late Late prejudice, I still thought he stank. He looked rattled, he kept citing wobbly legal reasons for not talking about the letters he sent to Israel on Oireachtas notepaper when he was a senator, pleading for clemency for his ex-partner, an Israeli guy who was convicted of rape of a 15-year-old. He looked like a performer who was desperately trying to keep all the plates spinning. Far from convincing, I’m afraid. He’s quoted as saying he wouldn’t take a male partner into the Aras during his tenure, were he elected. Why not? I thought it was supposed to be OK to be gay and to have a partner? …Sorry, I’ve wandered away from the point – right,  his Late Late performance. Maybe it was partly because he didn’t have the initial short interview with Tubridy, as the other candidates had (because he had a far longer on the Late Late Show two weeks ago, is why) but he didn’t pull up any trees when he did speak. In fact he hardly disturbed the grass.

6. Mary Davis. I got echoes of the ill-fated Margaret Ritchie when she came on in her eyeball-scorching red. Dress aside, it’s a pity for her that the debate wasn’t radio because she actually has a nice speaking voice. But this was telly and she looked jumpy and she sounded defensive when the subject of donations and Denis O’Brien came up. Tubridy did as much as possible to let her present her case but what she had to say was little beyond ‘I was the organiser of the Special Olympics’. Quite a feat and worthwhile, but all that quango talk that was hinted at – and she seemed to suggest that she sat on ’em for the good of the world, not her bank balance, even though this morning I read allegations (see how careful I am?) that she was trousering €190,000 for same…Where was I? Right, quangoland. She seemed to have spent a lotta time there. Not good.

5. Gay Mitchell. He’s got a funny walk (unintentional) but since he was sitting nearly all the time it didn’t show. What I remember is his jibe at Martin McGuinness (‘He’s a terrible name-dropper’) and his reminder that he came from a humble background – the mammy had to rear nine youngsters on her own. Well done to her and him, then, for getting where he’s got, but it’s not his widow ma we…  omigod, I nearly said ‘we’re electing’  – I meant ‘youse are electing’. Which reminds me: Gay was at pains to tell us all that Martin McGuinness must never ever call the state to the south ‘The 22 counties’ because the Latin root of the word ‘nation’ is ‘natio’. Or something like that.  No, Gay, 26 you lot got actually. And it’s a president they’re looking for south of the border, not a linguist. For a man who claims to have the unanimous backing of the all-conquering Fine Gael behind him,  his sails looked remarkably unfilled. Lightweight, I’m afraid.

4. Sean Gallagher.  Seemed a nice man. A bit earnest and a bit, um, odd-looking. His pitch was a mixture of ‘I worked with a lot of community groups’  and ‘I can show Ireland how to set up businesses’. He did what he could to make a virtue of not using posters but to little effect. In fact he’s right –  posters are a pain in the eye and in the arse  and they cost the taxpayer. But Gallagher didn’t punch that line home effectively  enough. Decent fellah, but a president needs more qualities than decency.

3. Dana Rosemary Scallon. I’ll hand Dana this – she brought the thing to life more than once. The bit where she waved the European constitution (big) and the Irish constitution (small) was enjoyable (we all hate Europe now) and the bit where she demanded why it was that Tubs had asked her about Catholic stuff and not the others, eh, tell me that, you tub of fat-free shite you, Tubridy… No, I made that last bit up, sorry. But she did seem stung once or twice and would you believe it, the studio audience loved her for it – thunderous clapping. She did what she could to suggest she was steeped in European knowledge from her time as MEP,  and she didn’t deny Gay Mitchell’s claim that she hadn’t joined the IRA (would they have had her?) and she nearly said ‘All kinds of everything’ once; but she still came across as honest and  reasonably knowledgeable. But she’ll find her earlier ‘learning-on-the-job’ statement hard to live down. A better performance than I expected and if it was anybody else but Dana, you’d say she showed she had, um, balls.

2. Michael D Higgins:  the Labour man from the West played a cautious game. He’s the front-runner with the bookies and he clearly didn’t want to say or do anything that might damage that. At this point I must confess that I’m not sure what Michael D wants to happen the 22-county southern state if he’s made president, and the reason for that is that I somehow lose interest a lot of the time before he gets to the end of his sentences. Yes I know it’s my fault. But there’s only so much ‘My mission is to redefine Irishness, don’t you know’ stuff I can take. I don’t know what it means and I suspect neither does Michael D. If you asked me would I vote for him for the 2.00pm slot at a sociological conference, I’d  comply, perfect fit, but for president? I suspect he’s a good little man, if a bit dreamy and a teensy bit vain about the size of his brain. Then there’s his age. This isn’t ageism, let me add – dammit,  I’m around the same age myself – but his walk is that of a man who’s in urgent need of a hip replacement and his expression was that of a man who’s feeling a bit wasted with all this running around –  fatigue shining through the make-up. Could they create a Vice-President post for him? Or make him Special Poetic Advisor  or something? I don’t like the thought of him going home empty-handed, but if the well-worn jibe about the Aras being where old politicians go at the end of their careers needed an example, they’d be tempted to look Michael D’s direction.

1. Martin McGuinness. Not the Derryman’s best performance but not his worst either. He sat with his hands flat on his thighs, which should have looked relaxed and comfortable but didn’t. He had the glasses on,  which made him look a little more scholarly. But it was the steady assurance about his responses, a weight to his words that I didn’t get from any of the others. He swatted away Tubs’s eternal ‘When did you leave the IRA?’ question for the gad-fly irrelevance it was, and he had the other candidates floundering in his wake with his declared intention to take  the average industrial wage   and use the rest to take six young people off the dole. He’s said that several times in the past but maybe he’s hitting the electoral nail on the head several times to make sure it drives home. The attempts to tie the man-of-terror mill-stone round his neck are beginning to backfire, I suspect, and two things are slowly headlining in the public mind about him: that he stomached Ian Paisley and then Peter Robinson for over five years, and even formed friendships of sorts with them; and that he’s one of the people himself.  Voteres in the south are in the mood to really stuff the establishment – first Fianna Fail drop them in it, now the FG-Labour  coalition  is dumping on them –  and McGuinness looks like a man they’d like to have in their corner.  It’s even in the voices –  listen to Michael D’s squeak,  Norris’s bray –  and contrast those with our DFM’s level tones.   So no, it wasn’t his best ever performance – he can be powerfully persuasive  when on top form –  think the Ronan Kerr reaction – but he still looked a heavyweight among middle-weights, bantam-weights and make-weights.

God, I hope Tuesday’s debate is better. The garden centres are full enough as it is.

View all posts by Jude Collins →
He’s the one! Or him? OK, ANYONE…
Going home, feeling humble