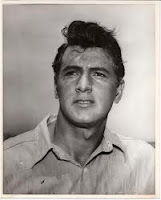 I once went to a movie called Giant in the County Cinema in Omagh. It starred Rock Hudson and was all about Texas and ranchers and cowboys and oil and stuff. I’ve forgotten everything in it except one moment where Rock is in a field on his own. Looking very soulful, he bends down and lifts a handful of soil and holds it against the sky: “The good earth!” he murmurs.
Maybe that’s what Arlene Foster’ll be at down in Fermanagh this weekend  – or maybe she’ll leave that to her husband.  Arlene’s hubby, you see, owns a little parcel of 54  acres down there.  Arlene’s department has granted a licence for shale gas exploration in the area and whaddyaknow, the area includes her hubby’s 54 acres! Arlene was involved in discussion of the licence application and expressed her belief that the licence be granted. This had nothing to do with her hubby’s little bit of ground, however.
A number of MLAs begged to differ. They said “You know, Arlene, you really should have told us about this when we were debating the matter – declared your interest, to wit, that your hubby owns 54 acres of the exploration area”.  In fact  one MLA, Stephen Agnew of the Green Party,  said Arlene should get the sack for keeping the hubby’s land-thing under wraps during the debate. The right and fitting thing would have been to  ‘fess up about a vested interest in the matter at the time.  What interest?  Arlene demanded, like a woman whose virtue has been impugned. Sure it’s my husband has it, not me. And when Noel Thompson on the BBC’s ‘Hearts and Minds’ asked her party leader about the notion of sacking Arlene, why, he nearly fell off his studio chair. Sack her? Peter demanded. Why, what rubbish! Arlene has no vested interest. Her husband has, but that’s different.
So now. There we were thinking that down in Fermanagh they took the marriage vows seriously. Especially the one about “All my worldly goods I thee endow”.  But maybe Arlene and her hubby had a different ceremony, or had a little footnote inserted to the effect that yes, all worldly goods we us endow, share and share alike, barring the hubby should happen to find himself with a wee 54-acre patch in the middle of a shale-gas exploration area, in which case that particular worldly good will be his and his only.
So this weekend, should you see a figure down in Fermanagh with a fistful of ground and muttering,  you’ll know who it isn’t. Hubby can shove his fist in  the ground and go on about the good earth until the cows come home across the fracking area  but include Arlene strictly out.
Sometimes, you know, the DUP are just so damned loveable. A marital partner gets caught in the media headlights  and they just kind of, well, they go all so wobbly-lipped or uneasy or sort of hurt/angry, you want to kiss the sore spot and say “There, there, little man (or woman), it’ll be better in a minute, don’t oo fret oor little heady-weady about it, before oo know it,  those naughty naughty reporter people will have forgotten the whole fracking thing.”
It was never like this for Rock Hudson.