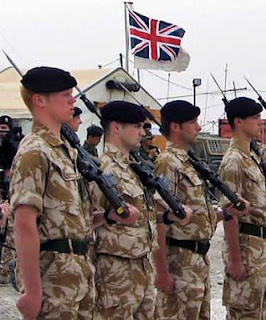 My father, a conservative man without a bigoted bone in his body, didn’t like the British army. A brother of mine puts this down to a clash he had with a British officer and his wife, when the pair were billeted in our house for a time during WW2. Another sibling claims it had to do with ribald remarks some British soldiers directed at one of my sisters, then in her early teens. Whatever the reason, my father had no time for the uniformed figures  that lived in the army camp across the river from us.  That was decades ago. The camp is gone now but  when I think of it, the shadow of my father’s hostility and the reasons for it remain.
I mention this because reports from the N Ireland audit office today say in so many words that the Stormont Executive were taken for a ride when they were handed  back six former British army bases eight years ago. How so? OK, in some cases they had to pay for the transfer, but still – prime sites and all that.
Well you see, the the catch is, the British army left the soil contaminated with fuel spills, lead, asbestos and other harmful chemicals, and it slipped their minds to mention this when they were passing over the sites. To decontaminate Long Kesh the cost is over £8,000,000.  To decontaminate the Fort George army base they figure it’ll cost somewhere between £4,000,000 and £5,000,000. The British MoD, a kindly body,  has agreed to pay some of the cost, but it’s protected under the settlement from contaminations  which it claims weren’t its fault.
Sounds like something from an Ibsen play, doesn’t it?  The ground is taken over  by the British, then years later given back  with no mention of the fact that the place is now in a poisonous state that’ll take millions to detoxify.  With Ibsen, the pollution of the water and landscape was symptomatic of the unhealthiness of the society. The British army have left us a costly and lasting reminder of what their presence here meant for us.
Did I say meant? Sorry, that was a slip, I should have said ‘means’ – there are still over 5,000 British troops still here. They haven’t gone away, you know.

View all posts by Jude Collins →
Pat Finucane – why his death matters so much
Mistakes, lies and selective outrage