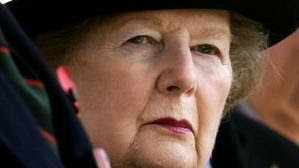 So what are you – British? Irish?  From time to time those commenting on my blogs tell  me it’s truly stupid to talk about Britain running Irish affairs, that they (unionists) are British, do I think one million people are going to be evicted?

This is an old argument and one used by the SDLP as well as unionists: that talk of ‘Brits out’ is absurd, the block to a united Ireland is not the British government but the one million unionists living in the north. Those who share this view should find government papers from 1981 instructive this morning. The Financial Times reports that Thatcher and her cabinet were very worried about a speech former PM James Callaghan was due to deliver, suggesting that,  in the face of the hunger strike and increasing unrest,  Britain should rethink its relationship to Northern Ireland.

“His views might well receive massive support from public opinion in Britain where there was already a widespread feeling in favour of British withdrawal. Many people in Britain now believed that a settlement of the complex problems of the area would be more easily reached by the Irish on their own and that continued British involvement could only mean the futile sacrifice of further British lives”.

It looks as though Thatcher & Co had no difficulty in spotting a qualitative difference between “British lives” and the lives of people living in Ireland, including unionists. Which of course there is.

Response to the release of the 1981 papers will no doubt lead to further drum-banging by those who desperately want to attribute the deaths of most if not all the hunger-strikers to Sinn Féin rather than Thatcher.The Financial Times, in contrast,  sees the central issue as being the possibility of British withdrawal from the north – in short, the beginning of the break-up of the United Kingdom.

But here we are 1981 and British withdrawal hasn’t happened.   Or should that be qualified? The UDR has been effectively dismantled, as has the RUC. A power-sharing Assembly now operates in Stormont ; justice and policing powers have been transferred here. That appears to be the policy of Sinn Féin – transfer as much power as possible from Westminster to Stormont, and in that way move towards ending the political union with Britain. They haven’t achieved that goal –  control of the key powers of taxation and foreign policy still rests with Britain; but a look at Scotland is instructive. There, the Scottish National Party has eviscerated the opposition, has some control of taxation if not of foreign policy, and while its leader Alex Salmond is much more popular than his key goal of Scottish independence, informed British analysts like Jonathan Freedland in The Guardian see a Scottish  Yes for independence in 2015 as a distinct possibility:   “Salmond may be the Times‘s choice of a great Briton, but his ferocious talent could yet prove to be Great Britain’s undoing”.

A final note: Salmond plans on having a second question on the 2015 referendum, in addition to the one asking Scots if they favour total independence. It’s being called “devo-max”, which would give Scotland every power short of a total break from Britain. In other words, his second-best would be to transfer as many powers as possible from London to Edinburgh, thus moving closer to total independence.  Sound familiar?

7 Responses to 1981 papers and Thatcher’s wobble