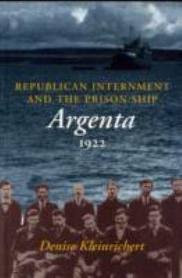 A few decades ago I was trying to make a radio programme about people who’d been interned on the prison ship Argenta  during the 1920s. I was tipped off that one 80-something survivor might give me an interview, so I found my way, after some searching,  to his house. Wasted journey. He told me – a plain talker, this man – that he’d never liked my father, or any of his many brothers and sisters.  No, tell a lie – there was one sister he liked. But the rest of them, including my da, he’d no time for. So no interview. Innocent that I was, I suggested that I wasn’t really to blame for anything my father and/or his siblings had done some sixty years earlier. Didn’t matter. I was my father’s son, so forget it.
I thought of that old man as I read an article in the Irish Times  this morning. It was about a son of the late INLA leader Dominic McGlinchey (also called Dominic).  Mr McGlinchey has felt the need to deny “in the most strenuous terms possible” that he was the driver of the getaway car involved in the killing of two British soldiers in Antrim in 2009.  Why did he feel the need to do this? Because counsel for  one of the accused  declared in court that the PSNI had “reliable information”   that one of the late Dominic McGlinchey’s sons drove the getaway car.  This information, apparently, has been widely reported in the Irish media and beyond, without the additional information that the PSNI has no forensic evidence to support their claim.
So what’s your reaction?  Do you say “Why, that’s outrageous – to claim a man is involved in a double killing, without evidence to back it up!”?  Or do you say “Dominic McGlinchey? A son of Mad Dog McGlinchey? Not one bit surprised”?  I venture to suggest that most people will have the second response.  I’ll leave aside the contemptible habit of the media for linking animals, often rabid animals – Mad Dog, the Border Fox, King Rat – with human beings, and say that  most of us are stuffed with prejudice. We assume that because people come from a particular place, or a particular family, or have particular friends, that they must share the political views and values of those linked with them. If the PSNI have evidence to implicate Dominic McGlinchey or anyone else in the killings in Antrim, they should produce it and prosecute. If they haven’t, they should shut up. And  equally the Irish media should realize that they have a responsibility to report ALL  of the relevant facts, and not allow themselves to be used as a channel for malodorous and unsubstantiated leaks.

And when you’re finished thinking about that one, you might want to ponder the fact that the two men charged with the killings are being tried in a juryless court. Mind you, the men  imprisoned on the Argenta got there without benefit of evidence or jury as well. Plus ca change…?

One Response to Evidence? What need have we of evidence?